By newsroom on April 4, 2016Comments Off on Space Creates Train Trophy Tour Experience For UEFA Euro 2016 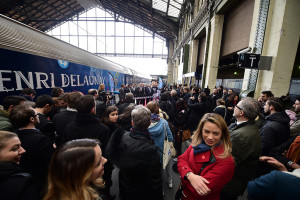 The UEFA Euro 2016 Trophy Tour launched recently, and will run from April 1 to June 9 2016, serving as a vital part of the build up to Euro 2016 which kicks off on 10th June. The Tour will take in 25 French cities (including the ten host cities) and is set to attract up to 300,000 visitors. Creative agency Space has designed and built a specially designed train containing a UEFA Euro 2016 exhibition which houses the star attraction, the Henri Delaunay trophy.

Space was briefed to ignite the fervour and passion of football fans of all ages with a range of digital and interactive opportunities. The exhibition includes photography and interaction with brand ambassadors on the platform at each station while visitors are queuing, plus separate experiences in each of the five carriages: 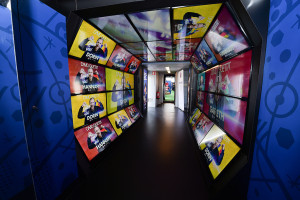 David Atkinson, managing partner Space, which was appointed by UEFA, the governing body for European football following a competitive pitch, comments: â€œThe Euro 2016 Trophy Tour will galvanise French and European anticipation and excitement around the Championships and weâ€™re proud to have been granted the chance to create it. The attraction builds and builds with each experience and delivers the perfect appetiser for what is sure to be a thrilling tournament in 2016. The ambition from UEFA to reach the widest possible audience will surely be delivered both live and through the digital and social activity created on the Tour.â€

The 2016 UEFA European Championship, commonly referred to as UEFA Euro 2016 or simply Euro 2016, will be the 15th tournament for men’s national football teams organised by UEFA. It will be held in France from 10 June to 10 July 2016.