The West of Ireland Gets Alien Endorsement in Otherworldly Travel Advert

By newsroom on December 14, 2017Comments Off on The West of Ireland Gets Alien Endorsement in Otherworldly Travel Advert

The Wild Atlantic Way in Ireland gets the intergalactic seal of approval in humorous and clever campaign, ‘Otherwordly’, by Fáilte Ireland and Rothco. The highly original advert features a fictional intergalactic travel agency, Tourism Cyhaccm – a tongue-in-cheek nod to the use of Irish locations in the latest Star Wars blockbuster. 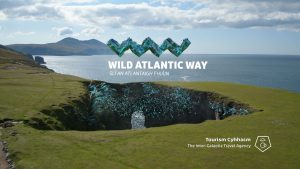 The 60” spot plays out to Irish cinema goers of Star Wars: The Last Jedi. Running just before the film begins, audiences will be shown the Wild Atlantic Way as never before: through the eyes of aliens. In the advert, visuals of the Wild Atlantic Way’s lush landscapes and stunning scenery are combined with oddly translated alien dialogue from the outer space travel agency:

“In an other galaxy lies the planet Earth. A small planet unlike to our. A destination way off the tri-vector path. But the perfected galactic escape. And why not start it on here? The earth inhabiters call it the Wild Atlantic Way. Relax. Let you’re hairs down. Don’t delaying. Go now.”

Creatively devised by Rothco, ‘Otherworldy’ leverages the heavy publicity the popular Irish tourism route has been receiving as a result of the recent Star Wars film shoot. By speaking the language of the captive sci-fi-fanatic Irish cinema audience, the campaign encourages them to re-appraise the familiar landscape with fresh eyes. It draws attention to the glorious scenery, culture and experiences – all of which lie temptingly, not so far-far away. 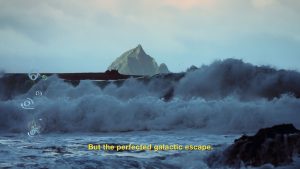 Daragh Anglim, Head of Marketing, Fáilte Ireland, comments: “The release of Star Wars: The Last Jedi brings with it a unique opportunity for the Wild Atlantic Way and Ireland. Our marketing will capitalise on the exposure that the blockbuster release will generate, positioning the area as a destination that is truly out of this world. This is all presented in a fun innovative and impactful way through the lens of inter-galactic visitors. We have developed a campaign idea with a powerful message driving consideration, while stirring a sense of awe, wonder and pride in a spectacular destination right on our doorstep.”

Alan Kelly, Executive Creative Director of Rothco, comments: “To engage domestic tourists in a completely new way, we committed to making the ad feel truly authentic. As a result, no Fáilte Ireland branding is visible. We deliberately created clunkily translated English subtitles and designed sound-reactive graphics to stimulate and entertain the audience.” 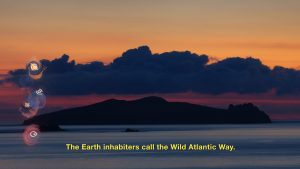 Bringing true authenticity to the sound design, EchoLab, which created this strange and fascinating galactic language, has worked on Star Wars trailers previously.

Stage two of the campaign will involve Fáilte Ireland’s response to the number of outer space visitors. It will release a series of quirky online social films in the style of helpful, friendly infomercials to educate these galactic tourists on the myriad of wonderful things they’ll encounter as they fully embrace the Wild Atlantic Way of life.

Viewers are encouraged to visit the official Wild Atlantic Way website, all designed to drive inspiration and bookings as the original Star Wars-themed approach resonates with the Irish audience.

The West of Ireland Gets Alien Endorsement in Otherworldly Travel Advert added by newsroom on December 14, 2017
View all posts by newsroom →