By newsroom on November 14, 2018Comments Off on Action Against Hunger strikes hard to end the use of hunger as a war weapon

Conflicts are one of the leading causes of hunger affecting millions of people around the world. Six out of ten undernourished people live in regions impacted by conflict. 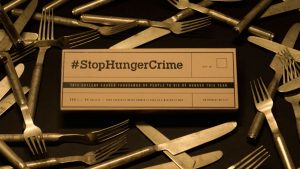 Hunger itself is often used as a weapon of war against civilians. Bombing markets, blocking access to roads, poisoning wells, destroying farming lands… these are some of the war tactics used to starve and enslave entire populations.

In light of this, in countries such as Yemen, Syria, Nigeria, Democratic Republic of Congo, Central African Republic or South Sudan, hunger is deliberately used as a weapon of war proving to be as effective as bombs and bullets.

In order to condemn these crimes Action Against Hunger and ad agency Herezie Group launch #StopHungerCrime.

The fight against hunger is also a fight for peace. That’s why the general public is being asked to help condemn these crimes. People can join the cause and post a picture of their own knife and fork making a cross with the hashtag #StopHungerCrime.

Action Against Hunger strikes hard to end the use of hunger as a war weapon added by newsroom on November 14, 2018
View all posts by newsroom →