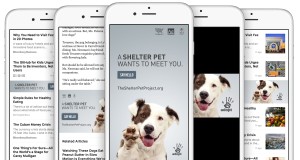 Bought through iAd, as with all News ads, the new native format will appear alongside regular articles in the content feeds. They’re identical to any other story – displaying an image, title and short excerpt, all in the app’s default font – except for a small ‘sponsored by’ tag.

Interestingly, including the advertiser name’s in this tag is optional – if they opt out, the tag will simply read ‘sponsored’.

These native ads are sure to be a useful addition for advertisers, but what’s perhaps more important about the announcement is how it runs against the apparent grain of Apple’s recent announcements, which seemed to suggest the company wanted to distance itself from advertising, which CEO Tim Cook in 2014 called “one very small part of our business”.

The iAd sales business was shut down in January, the same month it was revealed that Apple was working on ad-free paywall functionality for Apple News. This announcement, however, suggests that Apple’s not out of the advertising game just yet.