By newsroom on May 16, 2018Comments Off on AvL/SE’s hyper-real Pro Wildlife campaign alerts holidaymakers to animal cruelty in tourist attractions 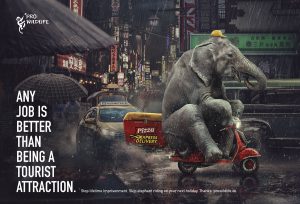 The campaign with the tag line ‘Any job is better than being a tourist attraction’, is composed of hyper-real images of exotic animals placed in unnatural situations. A Tiger washes the floor outside a Peep Show, and an Elephant drowns a Pizza delivery scooter on an Asian city street. Placing the animals in these unlikely situations emphasises the cruelty they face when forced to become an attraction for holidaymakers wanting to ride on an Elephant or taking a selfie with a tiger.

The print, OOH and online campaign has been released ahead of holiday season to deter vacationers from supporting animal abuse, which is particularly endemic in resorts in Asia, Africa and Latin America. The copy reads ‘Any job is better than being a tourist attraction. Stop lifetime imprisonment.’ 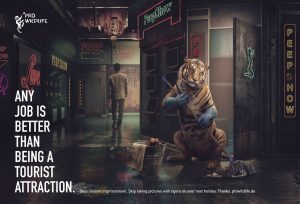 André Aimaq, CCO and Co-Founder, AvL/Saint Elmo’s commented: “Our relationship with Pro Wildlife goes back to 2006. This time, they tasked us with stopping people in their tracks and encouraging vacationers to question animal attractions and ultimately refrain from taking part. To make an immediate impact, we created a visual world that simultaneously captivates and disturbs viewers. We enlisted Ricardo Salamagica and his team for their hyper-realistic and dreamlike style – combining CGI, photography, and illustration. Their innovative and distinctive aesthetics made them the right fit for this project.”

Adeline Fischer, Campaign Manager at Pro Wildlife, added: “Hundreds of thousands of animals worldwide are suffering today in small cages and chains in the name of tourism. Riding on an elephant, taking a selfie with a chimp or stroking a tiger is for many holidaymakers an absolute highlight of their trip. Unfortunately, in the vast majority of cases, the animals are kept in miserable conditions and violently drilled, controlled or sedated. All this is why our organisation simply advises tourists to do their research before their trip. Genuine animal sanctuaries do not allow tourists to have direct contact with the animals, do not breed animals and they reintroduce the animals to the wild. Anyone who wants to be on the safe side should simply observe the animals in their natural habitat. That is where they are at their most beautiful.”

AvL/SE’s hyper-real Pro Wildlife campaign alerts holidaymakers to animal cruelty in tourist attractions added by newsroom on May 16, 2018
View all posts by newsroom →