By newsroom on December 11, 2017Comments Off on BBR Saatchi & Saatchi unveils a clickbait campaign designed to test the hearing of the video-muting Facebook generation

We’ve all fallen prey to clickbait. Those small innocuous looking posts in our Facebook feeds with ‘interesting’ headlines created to combat banner blindness. Posts most of us cannot resist clicking which usually lead to a double digit lift in click through rates.

With that in mind, creative agency BBR Saatchi & Saatchi decided to put this knowledge into practice for ‘Bekol‘, Israel’s Organisation for the Hard of Hearing, and get people to take a hearing test in spite of their reluctance to do so.

Appealing to the 85 percent of Facebook users who usually view videos with the sound off, we dared them to click on our post. Those who clicked were surprised to discover a video with a soundtrack that did not quite match the cute picture portrayed.

A soundtrack which once added, presented in fact a whole new and creepy narrative. Viewers who still thought our campaign video was cute, fun or even romantic were invited to get their hearing tested by Bekol. 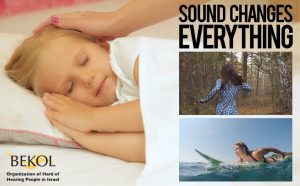 BBR Saatchi & Saatchi unveils a clickbait campaign designed to test the hearing of the video-muting Facebook generation added by newsroom on December 11, 2017
View all posts by newsroom →