By newsroom on August 17, 2017Comments Off on Carling Unveils On-Pack Promotion Giving Consumers the Chance to Win the Premier League Trophy 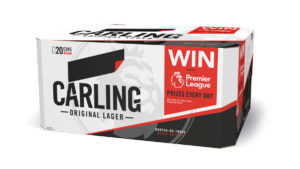 Carling has launched an on-pack promotion giving consumers the chance to win an array of Premier League prizes, including the trophy itself.

Working in partnership with the Premier League and Sky Sports the ‘Win The League’ campaign will give Carling drinkers the opportunity to get their hands on the famous silverware, allowing winners to take the Premier League trophy back to their home, their workplace, their local pub or even their own grassroots football club. 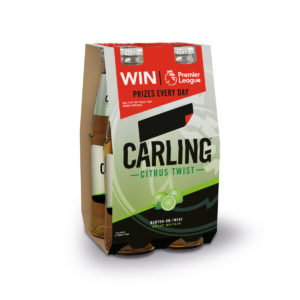 Lasting until the end of September, consumers who purchase promotional packs of Carling will be in with a chance of winning Premier League prizes every day. To enter the competition consumers will need to download the Carling Tap app on iPhone or Android devices and use it to scan any Carling can or bottle in a promotional pack for their chance to win. Within seconds of scanning, fans will find out whether they are one of that day’s many lucky winners.

The campaign will also be supported by Out of Home advertising and social media content.

Jim Shearer, Carling Brand Director, said: “Our latest promotion gives fans a chance to get even closer to the league they love through a whole raft of exclusive Premier League prizes. 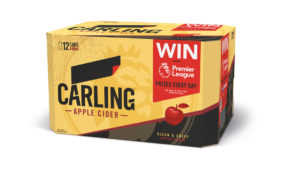 The Premier League and Carling go hand in hand, and we know that big sporting occasions drive sales of alcohol for the off-trade, so this promotion has the potential to be one of our most successful to date.”

At the start of last season Carling became the Official Beer and Cider of the Premier League, having previously been title partners of the Carling Premiership from 1993 up until the 2001 season.