By newsroom on September 7, 2018Comments Off on Detectives Crack an Unusual Case in Jameson’s New UK Campaign by TBWA\Dublin

Jameson Irish Whiskey teams up with TBWA/Dublin to launch a new spot for the UK market. â€˜The Case of the Most Unusual Caseâ€™ is the third instalment in the brandâ€™s â€˜Based on a True Storyâ€™ series, which kicked off earlier this year with â€˜Scully Was to Blameâ€™.

The 40-second TVC is directed by Stink Filmsâ€™ Anthony Mandler, whose work includes Appleâ€™s 2016 â€˜Taylor vs. Treadmillâ€™ spot, as well as for Nike, Adidas, and David Beckham.

Set in Johannesburg in 2017, â€˜The Case of the Most Unusual Caseâ€™ follows two detectives as they investigate a peculiar crime. Making their way through the lively downtown district of Maboneng, the pair reach a warehouse crime scene, where they discover a puzzling detail: the thieves have made off with only the Jameson, leaving everything else untouched. 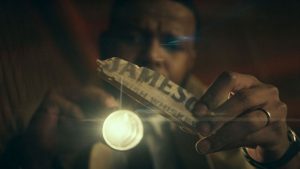 Later, the detectives mull over the mystery over drinks at a bar â€“ wondering not so much as to who is responsible, but why. However, the thievesâ€™ motives soon become clear when the detectives taste Jameson for the first time.

Creative agency TBWA\Dublin worked closely with Jameson to craft a campaign specifically targeted at the UK market. A key aim of was to reposition the brandâ€™s appeal towards younger consumers.

John Kane, Executive Creative Director TBWA, said â€œWhen we discovered this story while on a recent trip to South Africa, we thought it was perfect for the UK. Itâ€™s recent, itâ€™s true, itâ€™s set in a great location and itâ€™s full of great characters. We think the audience will be nicely surprised to find it comes from Jameson.â€

Simon Fay, International Marketing Director at Irish Distillers, said â€œâ€˜The Case of the Most Unusual Caseâ€™ is the latest instalment of the â€˜Taste, Thatâ€™s Whyâ€™ campaign, which puts the unique taste of the Jameson centre-stage. The new spot conveys the light-hearted, humorous attitude of Jameson in a very real and transparent way.â€

The campaign is now live in the UK. The TVC will be supported by print, digital, and social content.

Detectives Crack an Unusual Case in Jameson’s New UK Campaign by TBWA\Dublin added by newsroom on September 7, 2018
View all posts by newsroom →