By newsroom on October 22, 2018Comments Off on Dewar’s Doubles Down on its ‘Live True’ Anthem with New $15M Global Campaign

DEWAR’S Blended Scotch whisky announced the launch of a $15M global marketing push around its “Live True” campaign, which magnifies the brand’s obsession with doing things twice to make them better as a nod to its double-aging process. Running through end of 2019, the multi-market effort features a new TV anthem with Scottish actor Iain Glen, as well as print, digital/social and out-of- home (OOH) executions. The “Live True” campaign will kick off in the U.S., before rolling out across Spain, Puerto Rico, the Dominican Republic, and Lebanon, amongst other countries. 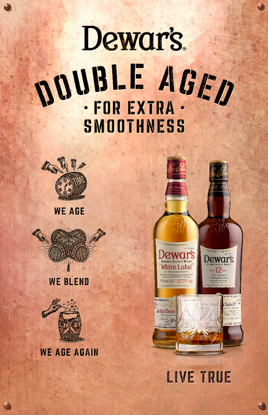 “‘Live True’ is a bold embodiment of DEWAR’S as a brand. We stick to our convictions and continue to double-age our whisky because we know it makes for a better, smoother taste,” said Brian Cox, Vice President DEWAR’S in North America. “This campaign kicks off robust global efforts to lift the veil off not just DEWAR’S, but the Scotch whisky category as a whole, showing the craftsmanship the approachability behind this storied spirit.”

Starting October 22nd, the new “Live True” TV spot will air across on-demand video services, as well as national and global entertainment, sports and news networks, including Comedy Central, CNN, ESPN, FX and Hulu. Esteemed actor Iain Glen serves as narrator, lending his unmistakable Scottish accent to the playful story of a man named Neville Neville, whose entire life is dedicated to doing things twice. From pitching two tents in a storm, to watching the love of his life walk down the aisle twice, Neville Neville cleverly captures the well-rewarded dedication of the brand’s “double-aged for extra smoothness” distillation process.

In addition to TV, DEWAR’S will run double-paged print ads in more than 15 different premium, sports, food, travel and tech publications, including Esquire, Food & Wine, Forbes, Sports Illustrated, and Travel & Leisure. The campaign will also come to life through digital and social efforts, as well as OOH executions in major metropolitan cities, including New York, Chicago and Boston.

“As we kick off our first globally integrated campaign in five years, the business is doubling down on DEWAR’S by revamping the brand’s merchandising program, fuelling the growth of its premium marques, and reshaping its on-premise experiential and sampling strategy,” continued Cox. “With blended Scotch whisky poised for a comeback in the U.S., the time is now for DEWAR’S, the most award-winning blended Scotch whisky, to capture the attention of whisky appreciators everywhere.” 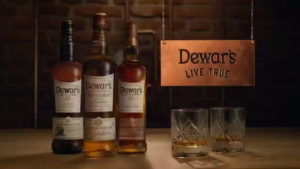 The “Live True” marketing campaign launch coincides a renewed focus on the brand’s presence in both the on- and off-premise.

With the goal of positioning Scotch whisky as an approachable spirit, DEWAR’S is reshaping its retail, bar sampling and menu strategy to include not just craft cocktails, but “everyday serves” as well, such as the Highball (DEWAR’S 12, soda water and lemon twist), which was originally created and popularised in the early 1900s by Tommy Dewar, son of founder John Dewar.

The brand is also rolling out a number of new gift packs and playful displays in the off-premise, all with a focus on the whisky’s double-aging process.

Finally, on the heels of its continued success with DEWAR’S White Label, the number one selling Scotch whisky label in the U.S., the brand will unleash the power of its full portfolio, including DEWAR’S 12, DEWAR’S 15 and DEWAR’S 18, with a goal to double distribution in the next year.

Dewar’s Doubles Down on its ‘Live True’ Anthem with New $15M Global Campaign added by newsroom on October 22, 2018
View all posts by newsroom →