By newsroom on November 30, 2018Comments Off on GUT and Tim Hortons Re-Launch True Stories Campaign with 6 Real Canadian Moments

Since 1994, Tim Hortons has been bringing Canadian values to life through its iconic True Stories campaign inspired by the lives of Canadians across the country. Now, Tim Hortons is bringing True Stories back to its roots in a modern and authentic way. Chosen from almost 18,000 stories received organically through the Tim Hortons website since 2008, Tim Hortons six new True Stories are based on real people and real experiences. 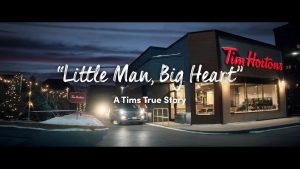 “This is a departure from stories inspired by guests to ones that reveal real, authentic moments that celebrate the unique relationship people already have with Tims,” says Paloma Azulay, Global Creative Head, Tim Hortons. “These new Tims True Stories will sometimes make you cry or they’ll make you laugh, but most of all, they bring Canadian values to life.”

The new format of the campaign, created by the global agency GUT, features real Canadians behind each story. The first Tims True Story is a particularly endearing example of generosity – Little Man with a Big Heart – which was submitted by Kelsey Kuefler, a former Tim Hortons team member. 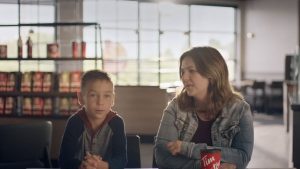 “We have blended cinematic re-enactment with popular docu-style on-camera interviews of real Canadians sharing their passion for one of Canada’s most iconic brands,” says Tamir Moscovici, film director. “As a Canadian, it’s an honour getting to refresh and revisit a campaign like True Stories and share these heartwarming moments.”

During the holidays, five-year-old Conor Raichel from Fort Saskatchewan, Alberta, asked his mom to pay for the order of the person behind them in the drive thru line. When his mom let him know she couldn’t because she brought exact change to cover their order, Conor took a $20 bill he got as a gift from his grandpa, handed it to his mom and asked her to pay it forward. 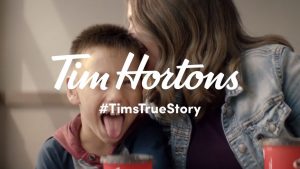 The motivation for his selfless deed? “Everyone deserves kindness at Christmas,” says Conor, now 7. “This holiday season I want to challenge all Canadians to show a little kindness to someone else the next time they’re at Tim Hortons – you might just make someone’s whole day!”

Conor’s story, the first of the six Tims True Stories video series, launched November 29 online and will air on television starting December 5. The others will be released throughout 2019. Tim Hortons encourages all Canadians to pay it forward this holiday season and share their own story online using #TimsTrueStory or here.