By newsroom on September 12, 2013Comments Off on Home Office accused of illegal font use on illegal immigrants campaign 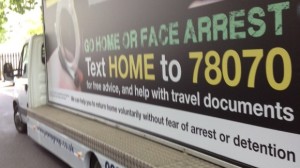 A French type designer has accused the UK Home Office of using his typeface without permission on its recent anti-illegal immigration van campaign.

Designer Fabien Delage claims the Home Office has used his Plane Crash typeface for the campaign, without paying him or requesting a licence.

He says the ‘Go Home or Face Arrest’ wording is rendered in the Plane Crash font.

Delage says, ‘I found out that the Home Office was using my font thanks to British graphic designer James Jessiman, who told me he recognised the typeface printed two-feet high on vans.’ 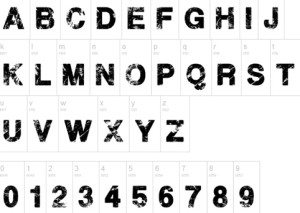 Plane Crash is available on the dafont website and can be downloaded for free, but it cannot be used for commercial purposes without a paid-for licence, which Delage would have to approve.

Delage says, ‘My fonts are free for personal use only, if you want to use them for work you have to purchase the licence on my website.’

He adds, ‘I create typefaces and that’s how I earn my living. I have absolutely no way to control who’s using my fonts except for freelance artists that play the game, buy the licence online and get a licence agreement from me.’

Delage says he has contacted the Home Office but that they have failed to respond. He says, ‘My partners and customers now suspect I might have been involved in this campaign which, let me tell you, has been quite unpopular abroad.’

The Home Office says the campaign was produced in-house. The department says, ‘We are seeking to contact the copyright owner in relation to the use of the font. It would not be appropriate to comment further at this stage.’

Home Office accused of illegal font use on illegal immigrants campaign added by newsroom on September 12, 2013
View all posts by newsroom →