By newsroom on April 12, 2013Comments Off on John Lewis Unveils AR Campaign For Samsung Smart TVs 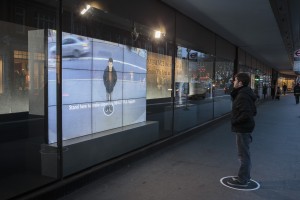 Created by TRO Group, the campaign launched today and is set to run for a month, and includes an AR interface which allows the user to control a number of content scenarios that are played out across the TVs in the window and also through glass mounted speakers to complete the Smart TV experience.

Markers outside each window at the Oxford Street and Sloane Square stores invite people to stand in front of a high resolution Samsung 3×3 video wall, and when this happens, sensors switch to a live mirror image of the person outside, who is then surrounded by four themed plinths emerging from the ground. 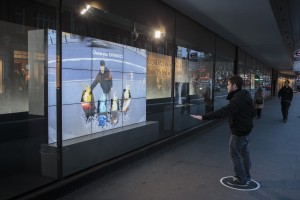 James Barnes, account director at TRO, told The Drum: “It has been a pleasure to work on such a fantastic project that brings together cutting edge technology and design to deliver a unique consumer experience in an unexpected environment. John Lewis wanted to deliver something out of the ordinary for this particular piece. Hopefully the public will be excited by what has been created for them.”

TRO Group worked with creative production company Inition to design and build the custom hardware to sense the customers on the street.

This is part of a wider campaign that has been launched by John Lewis with adam&eveDDB, to promote the retailer as the place to experience the latest Smart TVs, under the campaign message ‘BEAUTIFUL– On or Off’.