By newsroom on November 6, 2018Comments Off on Louis Walsh stars in new Christmas ad for Elves Behavin’ Badly toy range 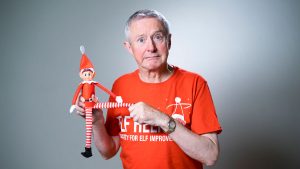 An appeal-style video released today sees the Irish music mogul take the lead role as ‘Elf Help’ ambassador, appealing to families to take in a naughty elf this Christmas.

The witty advert sees the Westlife manager telling the story of Elfie and Elvie – two troubled elves who have been kicked out of their homes for joyriding reindeer and getting up to no good. As the story unfolds, an ‘Elf Help’ worker delivers the elves to the Chowdhury family who generously take the dolls into their home. But the elves cause havoc by pulling pranks on the family; graffitiing the Dad’s face with marker pen, sneaking chilli sauce into the dinner and gift-wrapping the family dog.

Agency Taylor Herring were appointed in June by brand owner PMS International Group to build brand fame for the break-out doll range. The spot was created by Taylor Herring and produced by the agency’s production arm St Marks Studios. 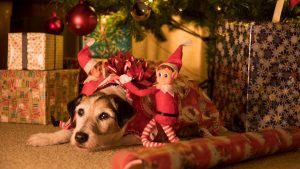 The ad prompts families to share set-up pictures of their badly-behaved elves using the hashtag #ElvesBehavinBadly. The spot will feature on major online channels including Facebook and YouTube.

The campaign will be amplified across social media channels with comedians and Twitter influencers tasked to take on the elf photography challenge. The agency will produce daily content for the brand’s social media channels, alongside running a reactive Twitter newsroom fronted by naughty elves in a purpose-built micro office.

The Elves Behavin’ Badly doll range exploded onto the scene in 2017 with over TWO MILLION elves sold in the run up to Christmas, making it one of the biggest selling toy brands of the year. The brand is on track to sell a further two million naughty elves by Christmas 2018. Major retailers stocking the Elfie and Elvie elf dolls include; Poundland, Tesco, Morrisons, Asda, WH Smith and Amazon. 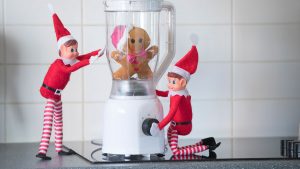 Parents have latched onto the elf doll craze setting up funny elf scenes for their children to wake up to. Once the kids are in bed, mums and dads place the naughty elves in unexpected locations in the house so the kids wake up with anticipation to find out what the naughty elves have been up to during the night.

Earlier in 2018 Taylor Herring unveiled a mobile outdoor campaign in the form of lorries wrapped in witty elf designs. The toy manufacturer covered its entire fleet of 30 lorries with images of Elves Behavin’ Badly in different playful set-ups.

Louis Walsh said: “Last year Elves Behavin’ Badly caused a viral sensation but this year they’re set to top the Christmas toy charts. The naughty elves have become social media stars in their own right taking over the nation’s Instagram and Facebook feeds as parents get ever more creative and ingenious with the set ups. I can’t wait to see what people get up to with their elves in the run up to Christmas.” 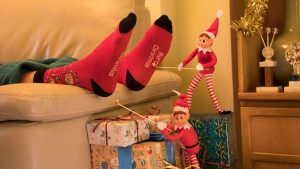 Paul Beverley, Managing Director at PMS International Group PLC, said: “We wanted to make a splash this year with a Christmas advert unlike any other. In true Elves Behavin’ Badly style, it’s very tongue-in-cheek. We hope parents and children alike will get involved with sharing their elf antics on social media and we’ll be rewarding the best with prizes every week.”

James Herring and Sam Corry are the Taylor Herring creative team behind the campaign. The spot was directed by Jon Brooks and production managed by Max Gheysens at St Marks Studios.