By newsroom on October 30, 2018Comments Off on me&dave takes the conversation to the next level with a rebrand for homeless charity robes

me&dave has rebranded Southwark-based homeless charity robes, to help it attract the investment it needs to continue its life-saving work on the streets of London.

robes’ volunteers spend eight months of the year campaigning and raising money to provide shelter during the harsh winter weeks. They also provide practical and emotional support throughout the year to some of London’s most vulnerable residents – 75% of whom go on to live more secure lives. 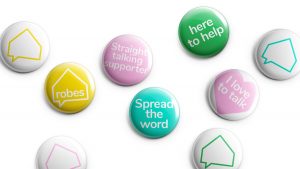 me&dave’s creative director Mark Davis, says: “To mark our 10th anniversary, we wanted to partner with a charity and donate our time and expertise. robes, which is based in the same borough as us, appealed to the whole team. Our work sees us focus on high-end real estate, so to help a charity that works tirelessly with people at the other end of the scale seemed like the right fit. Initially we approached robes offering to help with its supported housing initiative, which aims to enable those who find themselves homeless to access rented accommodation. In the end, robes asked us to reinvent its entire brand strategy.” 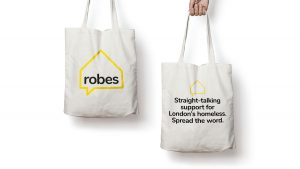 me&dave worked closely with the charity to develop a fresh identity and marketing collateral that would get its message across in a powerful but friendly way to potential volunteers and corporate sponsors.

The name ‘robes project’ was shortened to ‘robes’, as the word ‘project’ implied it was a temporary enterprise. A new logo – a yellow linework house that doubles as a speech bubble – expresses that, while robes provides shelter, it also believes that lifting someone out of homelessness starts with a conversation. The soft font and warm palette express the ‘human’ nature of the charity and bring a sense of compassion and unity to the brand. 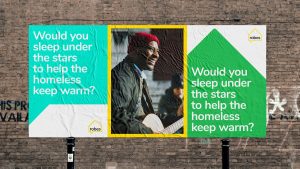 Mark Davis says: “robes lacks a big backer and to get one on board it needed to evolve the brand and get noticed. We wanted to communicate what an important charity it is, as well as create a design that would have longevity and be easy to apply across all communications in the future.”

The design team developed a new identity and communications strategy with an approachable, inclusive and optimistic feel. me&dave’s uncluttered approach allows robes’ mission statements to stand out, appealing to all walks of life, from the street to the boardroom. 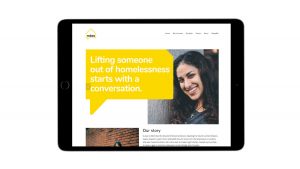 The new look is being used across all branded materials, including the website and annual reports, flyers and badges for the annual SleepOut (where supporters spend a night on the streets to raise funds and awareness), and posters for the churches in Southwark that are involved in the winter shelter programme.

George Martin, robes’ Chair of Trustees, says: “me&dave has done a brilliant and imaginative job of rebranding robes, communicating clearly what our organisation is all about. The approach is modern, eye-catching and has real depth and meaning. We’re so grateful for the help – it goes a long way with a small charity like ours and will have a positive impact on the lives of homeless people.” 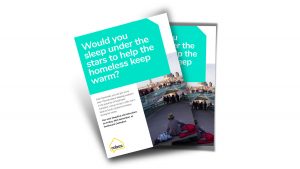 robes’ new identity is being rolled out this month in conjunction with a canvassing programme for the sponsored SleepOut, which will take place on 30th November. me&dave is looking forward to a longstanding partnership with the charity and assisting with strategic thinking as it continues to help the homeless community in Southwark. And the whole team is joining SleepOut 2018 too!

me&dave takes the conversation to the next level with a rebrand for homeless charity robes added by newsroom on October 30, 2018
View all posts by newsroom →