Omo Sports sponsors the Corinthians jersey in a F.biz action that innovates the use of hydrochromic ink

By newsroom on April 20, 2018Comments Off on Omo Sports sponsors the Corinthians jersey in a F.biz action that innovates the use of hydrochromic ink 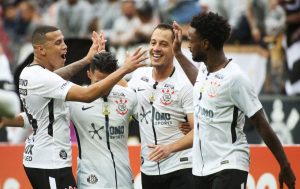 Corinthians entered the field with a jersey especially created for the debut of the team in the Brasileirão 2018. As soon as the players’ sweat began to get in contact with the fabric, the name of the laundry powder, Omo Sports, was revealed, confirming its sponsorship to the club in the game against Fluminense, held at Corinthians Arena, at Itaquera (SP).

“We created an innovative action for an equally innovating product. We gathered several partner teams to sweat the jersey and initiate a conversation with the audience aligned with what the brand proposes, a dialogue capable of inserting Omo in the sports universe in an engaging and pertinent manner,” says Guilerme Jahara, CCO at F.biz. 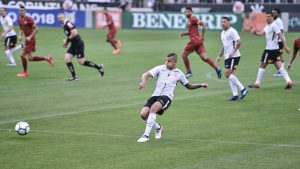 For Giovanna Gomes, Marketing Director of Omo, “the brand is constantly innovating and bringing remarkable moments to its consumers. And just as Omo is one of the most remembered and used brands of the Brazilians, football is one of the favourite sports. Nothing better than showing that every drop of sweat marks, than being associated with a sport that connects and excites people.”

Leader in the category of clothing care, the soap brand, Omo, wants to strengthen its presence in the day to day of those who practice physical activities – a habit that has been turning into an increasingly strong and popular lifestyle in Brazil – whether amongst amateurs or professionals. Produced with an exclusive technology for the removal of bad odour, the Unilever-owned brand arrives as the best solution in the market of sweat-soaked clothes.

With the hashtag #suorquemarca (#sweatthatmarks), the action idealised by F.biz constitutes a punctual agreement for the Corinthians opening game in the Brasileirão 2018, it’s not a master sponsorship. The communication was supported by a media plan created by MullenLowe Brasil.

The idea implemented by F.biz innovates the use of hydrochromic ink, which has already been manipulated on paper, among other surfaces. But its application on fabric is something unusual. The brand name – Omo Sports – was written on the Corinthians jersey with a special chemical composition that only appears when in contact with water. The process uses Chroma’s Microcapsule Technology.

Omo Sports was announced in the last month of January with the campaign “every drop of sweat marks”, also developed by F.biz.

A commercial film was aired on the main channels of open and closed television, in addition to digital platforms. The strategy also includes special activations that will be held throughout the year of 2018 to disseminate the global message “Moments that Mark”.

The goal is to establish OMO sports as a benchmark in the world of sports and make the brand present in moments of fun, struggle and well-being.

Omo Sports sponsors the Corinthians jersey in a F.biz action that innovates the use of hydrochromic ink added by newsroom on April 20, 2018
View all posts by newsroom →