By newsroom on September 14, 2018Comments Off on OREO Teams with The Slow Mo Guys for New UK Brand Campaign by ELVIS

OREO, the world’s favourite cookie, has revealed a new brand campaign, ‘Some People’ll Do Anything For An OREO’, as it seeks to drive further penetration in the UK. The initiative features content by YouTube stars The Slow Mo Guys and was developed in partnership with creative agency ELVIS.

The campaign is the first work to launch as part of the Mondelez-owned cookie brand’s partnership with ELVIS, following their appointment in March 2018.

‘Some People’ll Do Anything For An OREO’ dramatises the playful lengths people will go for the taste of an OREO. The campaign features a number of executions which tap into OREO lovers’ desire for the delicious cookies.

As part of the initiative, OREO and ELVIS engaged The Slow Mo Guys, the science and technology entertainment web series famed for its slow motion videos, to create a humorous film featuring its stars Gavin Free and Daniel Gruchy putting the new campaign to the test. Free asks Grunchy if he’ll sprint full speed on a treadmill, before plunging backwards into a giant pool of milk, in exchange for an OREO; all in super slow motion. 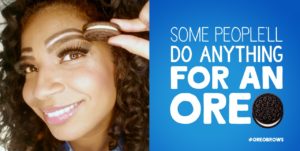 The video will appear on The Slow Mo Guys’ YouTube channel, which currently has more than 11 million subscribers and over 1 billion views, with cut-down versions running across social and digital channels.

The campaign sits within OREO’s recently-launched global ‘OREO people’ platform. Media strategy and buying for the initiative is by Carat UK, with content distributed via UK social channels. The campaign is also supported by a media partnership with LADbible.

Katie Dade, Senior Brand Manager, Sweet Biscuits, Mondelēz, said: “We’re excited to launch this new campaign, which brings to life the deliciously irresistible taste of OREO in a surprising and entertaining way. ‘Some People’ll Do Anything For An OREO’ is the latest chapter in the story of continued growth for the world’s number one cookie.”

James Hudson, Associate Creative Director, ELVIS, added: “We’re proud to have partnered with OREO to create an unexpected and unforgettable campaign which should cut through the social noise and inspire people to try OREO. We’re also thrilled to be leveraging the creative talents of The Slow Mo Guys, in a fun and authentic way which should hopefully resonate with their huge audience.”

OREO Teams with The Slow Mo Guys for New UK Brand Campaign by ELVIS added by newsroom on September 14, 2018
View all posts by newsroom →