By newsroom on September 17, 2018Comments Off on Paddy Power opens ‘Museum of Mischief’ in Dublin to mark their 30th Birthday 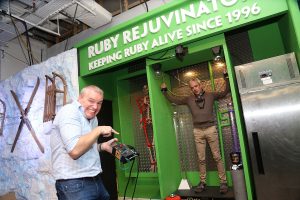 Paddy Power have opened a ‘Museum of Mischief’ in Dublin this week to mark a landmark birthday – an interactive experience celebrating 30 years of an incredible Irish brand.

The super-charged pop-up, which opens on September 18, is located at the top of Grafton Street, and offers members of the public a jaunt through the bookmaker’s back-catalogue of irreverent marketing every afternoon this week.

Then, each evening, Ireland’s premier interviewer Eamon Dunphy will be going head-to-head with leading sports personalities, in front of an invited audience and a camera crew – starting with record BIG goal-scorer Robbie Keane.

The exhibition itself will consist of various elements, including: 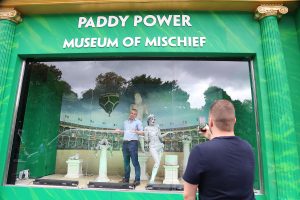 Ruby Walsh, who is the star guest on Wednesday evening, said: “Paddy Power is an Irish institution – up there with Mrs Brown’s Boys, in my esteem. And almost as funny. I’m delighted to be able to reveal their mystical contraption that keeps me coming back to both them and to racing. And, no, it’s not just my contract, although it does mean I’m legally obliged to say that the Paddy Power Museum of Mischief will be a lot of fun.”

Host Eamon Dunphy said: “As a brand which matches my inherent sense of mischief, I’m delighted to be hosting Paddy Power’s event this week. And we’ve got some line-up of guests. I’m looking forward to interviewing each of the guys at the Museum of Mischief, as they’re all fascinating subjects with great achievements to their name.” 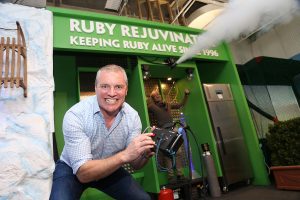 Spokesman Paddy Power said: “Guess who’s making an exhibition of themselves again? But the last 30 years have been a wild ride for Paddy Power – we’ve gone from seeing off the invasion of English bookies to taking on Russia’s ridiculous stance on LGBT+ rights. There have, of course, been some divisive things along the way, and we think it’s only fair to showcase those, too, to tell the full story of Paddy Power – and give an insight into what the future might hold.”

Paddy Power’s Museum of Mischief is open all week. Free general Admission (Over 18s only) is available between 12 and 2pm, between September 18th and 22nd.

Paddy Power opens ‘Museum of Mischief’ in Dublin to mark their 30th Birthday added by newsroom on September 17, 2018
View all posts by newsroom →