Peugeot has launched a new social and online campaign for its Just Add Fuel insurance finance package aimed at helping young people who want to buy their first car.

Just Add Fuel (JAF) is a deal where the owner pays a fixed low monthly fee, which includes insurance, three years’ warranty and road tax. JAF has been made available to millennials for the first time because it now comes with telematics (technology that monitors the quality of your driving) – which means millenials can now afford to drive a brand new Peugeot, instead of the usual option available to them; doing up an old banger.

The campaign, created by Stack, features two online films and is inspired by the problems that arise when you can’t afford a decent car. 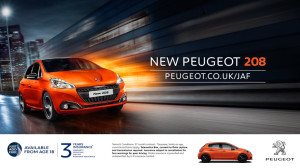 The first film, which is aimed at male millenials, follows a young man about to go on a date. We see the wonderful possibilities he imagines in the run up to the big event, but in the end his old car lets him down and the reality doesn’t match the fantasy.

The ad will be followed by another film, this time targeting female milennials. The 30-second films will run on Facebook, Instagram and YouTube for six weeks.

Helen Main, Comms Manager at Peugeot, said: “Whilst we’ve already talked to parents through more traditional channels about the benefits of Just Add Fuel, we’ve now utilised social media and digital channels through the use of creative content which shows a younger audience that Peugeot understands the challenges they face. The content is a fast and funny delivery which makes them both re-evaluate the brand, and share with their mates.”