By newsroom on September 25, 2018Comments Off on TMW Unlimited creates boxing-themed social campaign for Lynx 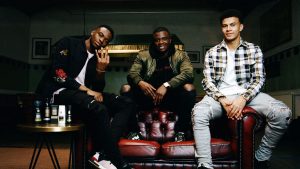 In each of the three short films at the heart of the campaign, one of the three is challenged by Joshua to see how many speedball punches he can throw in just 30 seconds then, at the end, he passes the challenge on to the next ‘Man of the Moment’ to be featured.

Lynx launched its Men of the Moment initiative in 2016.

The ‘Men of the Moment’ strategy began by assembling a definitive list of today’s most culturally relevant men shaping our times, challenging male stereotypes and achieving success on their own terms. The men selected also include actors Chadwick Boseman and Daniel Kaluuya; musicians Stormzy and Wiley; and Prince Harry.

Jamie Brookes, Brand Manager at Unilever, said: “Lynx has been using a variety of assets featuring our ‘Men of the Moment’ since the start of the year to show how these men style-out embarrassing moments, meet life’s daily challenges, and stay ‘gold’. It’s all part of our intention to re-frame debate around what masculinity is in the 21st century and what it now means to be a man.”