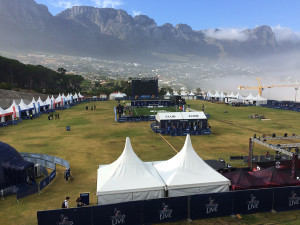 Wasserman will deliver a two-day fan park experience called Barclays Premier League Live in Cape Town for Barclays and the Premier League. The event, which is the third of its kind to be produced by Team Wass, will take place on 19 – 20 March 2016 at Camps Bay High School in Cape Town.

The agency have transformed the stunning 18,500sqm location into a huge fan park for Barclays Premier League (BPL) football fans; visitors will be able to watch key matches on a giant 118sqm screen alongside 15,000 excited fans. The live event offers fans the opportunity to meet football legends such as Robbie Fowler, Peter Schmeichel, Lucas Radebe and Quinton Fortune, get up close to the iconic Barclays Premier League Trophy and take part in various activities ranging from skills competitions to mini-activations provided by 9 BPL Clubs, such as Arsenal and Manchester United.

By taking the game day atmosphere of a typical BPL match and facilitating it in markets across the world the event delivers a premium and authentic fan experience. By doing so, the League and the Clubs aim to reach more fans in local markets and engage with grassroots to drive the global popularity of football.

The free event will be split into nine activation zones across the huge venue. These include:

The Live Match Zone – five of the best matches over the weekend will be shown as the top team’s battle it out to lift the Barclays Premier League trophy. There will also be pre-match analysis from the BPL legends, alongside pre and post-match Q&A’s with BPL sports anchors John Dykes and Neil Andrews, plus live music and more.

The Pitch Zone – local football teams have the opportunity to harness their skills with coaching sessions by Barclays Premier League Club coaches.

The Skills Zone – an area that will give fans the chance to test their accuracy, close control and shooting power against the greatest players in the Barclays Premier League.

The Screening Zone – a specially made arena where fans can experience what it is like to be part of the most exciting football league in the world. This zone will take fans through some of the greatest and unforgettable moments of the Barclays Premier League.

The Trophy Zone – will give fans the chance to get up close to the Barclays Premier League trophy.

The Club Zone – an area that will provide an interactive experience using facts and trivia to educate fans on their favourite Barclays Premier League Clubs.

The Clubs and Partners Zone – will provide an area for fans to participate in interactive games, meet the famous Club mascots and get the chance to take home some exclusive getaways.

Jackie Fry, Events Manager at the Premier League, said: “Over the course of the weekend we expect huge numbers of fans to pass through our gates, eager to watch live matches and learn more about the teams they support. We are proud to have built a platform for these international fans to access their favourite teams and players, hopefully creating an unforgettable weekend for all.”

Simon Tracey, head of client services at Wasserman said: “The Barclays Premier League is one of the most famous and premium sports brands in the world. This is the third time we’ve produced BPL Live, and each year the event gets bigger and better as we help to deliver an authentic Barclays Premier League experience and bring fans closer to the sport they love.”