By newsroom on July 16, 2018Comments Off on Yukon’s Midnight Sun Shines Bright in Vancouver in New OOH Campaign by Cossette 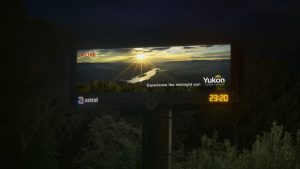 Summer is here, and to celebrate, Tourism Yukon and Cossette are sharing one of Canada’s most stunning natural phenomena: the midnight sun.

The midnight sun refers to what happens in the summer sky around the Arctic Circle. The sun drops in the evening, but never quite sets. Then it rises again. Hence the sky is a riot of colour for several hours in the absolute dead of night.

Live images are being captured for two weeks between 11:00 PM and 1:00 AM just outside Dawson City. Working with Astral Media, those same images are then instantly posted onto digital billboards across Vancouver and the North Shore.

“We wanted to bring some of the magic of the Yukon to the Lower Mainland,” noted Kelsey Hughes and Mark Wilson, the creative team at Cossette. “The contrast between the brilliant sky in the visual stream and the darkness surrounding the boards is pretty dramatic.” 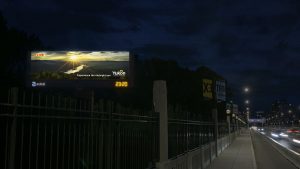 “The Yukon has always been a place of larger than life experiences and sights,” noted Jason Marcotte, Marketing Manager, Tourism Yukon – North America. “If the scene looks amazing on a board thousands of kilometres away, imagine being here in person. It is pretty remarkable.”

Vancouver and the Lower Mainland are key target areas as YVR is the main departure point for visitors traveling to the Yukon. The flight takes just under 2.5 hours and there are three to five flights daily, depending on the season.

Yukon’s Midnight Sun Shines Bright in Vancouver in New OOH Campaign by Cossette added by newsroom on July 16, 2018
View all posts by newsroom →