By newsroom on March 8, 2016Comments Off on 81-year-old Icelandic woman stars in ad campaign by Iceland’s leading clothing brand 66°NORTH 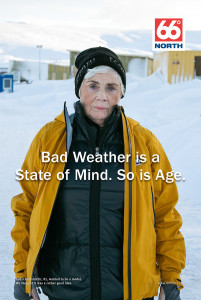 Iceland is a country where women occupy many of the top jobs, and grow up with the thinking that age and weather are just a state of mind. So it was with this in mind that Iceland’s largest consumer brand, the clothing company 66°NORTH hired an 81-year-old grandmother with no past modelling experience as its newest model.

Ásdís Karlsdóttir is from a small village called Akureyri, and she has begun a new line of work at the grand of age of 81 and it just happens to be modelling. Her lack of experience and age did not deter media and the brand from giving the inspiring woman a chance.

Says Ásdís: “I did one of those quizzes on the internet, a Facebook career quiz in fact, called something like, “Which job suits you best?” and the answer was: “a model!” The picture beneath was an ad from 66°NORTH who were advertising lots of exciting new jobs. I didn’t go on their website, I just “liked” their page and also left the comment, “Do you need a model? I’m eighty years old.” I even posted five pictures, just to make things more fun. The next morning I woke up to a phone call from a journalist from the local newspaper asking whether they could write a story about my post.”

Ásdís knew of the brand because her late husband used to wear the clothing.

One week later she was in front of the camera spotlight wearing 66°NORTH and modelled for the popular outdoor brand in adverts that have now been published. The Icelandic press and TV immediately picked it up and the brand’s social media channels have seen through the roof engagement.

Besides having fun and giving a go at modelling, Ásdís felt there was more to this than just making memories. She wanted to show that modelling can be for older people too, rather than just a young crowd.

“It’s been a real adventure, a true adventure for an old lady. It was really fun, something different,” says Karlsdóttir, a former PE teacher. “I guess people have always thought of me as a little different. I don’t drive a car and recently I bought a baby pram to go grocery shopping because I don’t want to bother people to drive me to the supermarket.”

The campaign starring Karldóttir continues along the same themes as previous company adverts, rugged Icelanders wearing 66°NORTH in all kinds of weather. The difference this time, however, is that the model is at least 60 years older than previous ones.

Physical exercise and the outdoors are part of a daily routine in Ásdís’ life. She goes for long walks nearly every day and sometimes for nearly two hours at a time.

“My pace varies, depending on the circumstances. This winter was especially icy, the ground could be likened to an ice rink, lasting months. But now it’s wonderful to walk outside… on crampons.”

Iceland living requires that women (and men) have to carry out their daily activities in usually freezing temperatures living with the knowledge that the weather can turn hazardous at any moment.

Bjarney Harðardóttir, (Female) Vice President of Business Development at 66°NORTH explains: “We have always used strong ordinary people in our ads and they have ranged from men and women in their fifties to children as young as 2. Ásdís is a strong person with a strong character, whose charisma shines through; she showed an initiative and possesses a courage that we admire. She does not let age or weather prevent her from trying new challenges. All of this really represents who we are as a brand.”

Ásdís is living proof that age is just a number and a mindset. She is an inspiration to women of all ages to seize the day and continue to live life to the full. The 66°NORTH campaign has given Ásdís a new lease of life.