By newsroom on November 17, 2015Comments Off on Ashton Kutcher & Motorola put people’s smartphone addiction to the test

Motorola teamed up with actor-turned-startup investor Ashton Kutcher in this new commercial that aims to illustrate people’s dependency on their smartphones.

Participants were invited to sit alone in a square cubicle facing a large mirror, with their hands placed on a transparent tabletop. Their mobile phone was left on the table, placed between their hands, with the screen facing down. 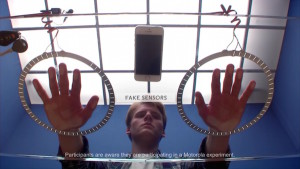 Kutcher then instructed texts and calls to be directed to each participant’s phone and observed the duration of time before they picked up the device.

The experiment, however, doesn’t satisfy the objective. Picking up an incoming call or attending to a text message does not prove smartphone addiction—it could simply be a case of initiating an end to that annoying vibration or message alert.

Kutcher explained on Mashable, “I think the phone has almost become the new refrigerator. We’ve all had that experience where we go to our refrigerator and open up the door and we stand there and look inside and then we close the door without ever taking anything out.” 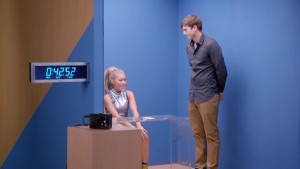 “It’s crazy, people feel like there’s this whole other world on the other side of their phone that they’re going to miss out on, and it’s almost the same thing with the refrigerator; we feel like we’re going open it up and something is going to magically appear that we didn’t realize was in there.”

Kutcher will be working with Motorola on its smartphone business in aims of creating devices that are smarter and more efficient.

Ashton Kutcher & Motorola put people’s smartphone addiction to the test added by newsroom on November 17, 2015
View all posts by newsroom →