By newsroom on October 10, 2013Comments Off on California Cracks Down On Illegal Outdoor Ads 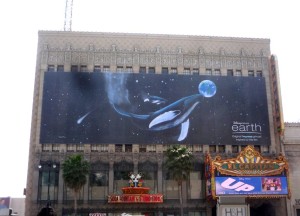 California might well be the world capital of outdoor advertising, but the medium is coming under increasing regulatory pressure, as state and local governments respond to complaints about the proliferation of illegal or simply unwanted outdoor ad displays.

Most recently, Governor Jerry Brown signed a law designed to crack down on illegal mobile advertising, in which signs on trailers are towed from location to location by cars, trucks or even bicycles. Their mobility makes it especially hard for local law enforcement to catch the illegal advertisers, who may set up shop along a busy highway or street for as short a period as a few hours, reaching thousands of commuters without ever obtaining a license or paying rent to city governments or property owners.

The new law gives some teeth to municipalities trying to enforce ordinances against mobile advertising, by allowing them to levy additional civil penalties (fines) against people who operate illegal outdoor advertising — without escalating to misdemeanor criminal charges, which are viewed as draconian as well as burdensome to local courts.

The list of cities that already have ordinances against mobile advertising on the books includes Los Angeles and San Francisco.

Los Angeles City Attorney Michael Feuer is proposing to jack up the penalties for illegal signs around 20-fold, according to LA Business Journal, which reports that fines could jump from $2,500 per day to $48,000 per day. These fines are applicable to both illegal mobile and stationary outdoor advertising; the LA city government has estimated that there may be as many as 4,000 signs lacking permits or otherwise violating codes around the city.

Legal digital billboards also face pushback in Long Beach, where the city council is considering a bill that would restrict the number of digital displays in the city and eliminating them from residential neighborhoods altogether. The law would include a “cap and trade” scheme, under which the city would allow a fixed number of static signs to be converted to digital billboards.

Outdoor advertisers will be required to scrap a certain proportion of existing billboards before they are allowed to build new ones.

California Cracks Down On Illegal Outdoor Ads added by newsroom on October 10, 2013
View all posts by newsroom →