By newsroom on August 24, 2015Comments Off on Droga5 NY’s ‘Anthem’ for Under Armour Features an Army of Athletes

Under Armour unveiled its ‘Rule Yourself’ marketing campaign, which defines the brandâ€™s vision for training as a lifestyle. The 60-second â€œAnthemâ€ spot and a series of shorter films that will debut this fall season showcase the self-discipline of NBA MVP Stephen Curry, American Ballet Theatre Principal dancer Misty Copeland, two-time golf major champion and NFL MVP and Super Bowl Champion Tom Brady, to raise the bar on what it means to be successful in training.

Created in partnership with Droga5 and Oscar-winning cinematographer and director Wally Pfister, the â€œAnthemâ€ spot shows a different side of the road to glory for athletes Curry, Copeland and Spieth. Even as a champion, principal dancer and MVP, their commitment to getting better is just as strong as it was on day one. In the spot, Curry, Copeland and Spieth are multiplied in front of the viewersâ€™ eyes, becoming an army of synchronized athletes, completing rep after rep, relentlessly practicing the skills that set them apart. The visual is impactful not only in its literal execution but also in its metaphorical significanceâ€”that each of these athletes must grow and rule their own â€œarmyâ€ within to provide the discipline, dedication and relentless spirit required of the best. 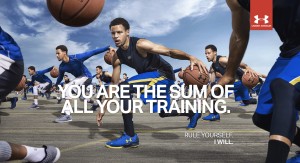 â€œThe concept of the â€˜Rule Yourselfâ€™ campaign is simple â€” you are the sum of all of your training. Itâ€™s the only way to get better, and itâ€™s the common thread that unites each of our all-star athletes around the globe,â€ said Adam Peake, Executive Vice President, Global Marketing, Under Armour. â€œUnder Armour provides the gear, equipment and digital tools the athlete needs to push through a tough workout. But we also want to give them that extra inspiration to improve everyday, to keep building their inner army and to stay focused on success even when the going gets tough.â€

Throughout his rise to NBA MVP, Curry was never the biggest, strongest or fastest player on the court. But he was known as the hardest worker, the first to arrive at practice and the last to leave, drilling shot after shot. â€œThis story captures the hard work that happens when no one is watching, and thatâ€™s the part of the game that has always kept me coming back for more,â€ said Curry. “When you love the game, you have to embrace the process and learn how to push yourself to get better every day.”

The brand will launch the 360-degree global campaign with media partners including ESPN, NBC, CBS, MTV, Instagram, Facebook, YouTube and a variety of lifestyle, digital and mobile outlets.

Droga5 NY’s ‘Anthem’ for Under Armour Features an Army of Athletes added by newsroom on August 24, 2015
View all posts by newsroom →