By newsroom on March 13, 2018Comments Off on England’s Historic Cities engage Hex to create AR/VR content to attract younger audience 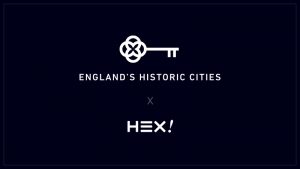 The digital creative agency Hex has been appointed by England’s Historic Cities to promote the consortium of the country’s premier heritage locations to a younger audience through the use of new and emerging technology, including AR and VR.

The appointment, which followed a competitive pitch, will build on previous work delivered by Hex, which comprised the creation of a content-rich mobile app, website and other digital marketing activity. This second phase will utilise cutting edge AR technology such as ARKit on iOS and ARCore on Android – to provide immersive augmented and virtual reality experiences. The work is due to break in July.

Nicola Said, project manager for England’s Historic Cities, commented: “Hex demonstrated an impressive combination of creative flair, technical know-how and stakeholder management throughout the initial EHC pilot project, which had to be completed on a very tight timeline. Their equally impressive and exciting proposal stood out during a competitive tender for the next stage. We look forward to continuing our work together in 2018 to reposition England’s incredible history to a new audience through innovative use of digital platforms.”

Benjamin Moore, managing partner at Hex Digital, added: “We’ve reached an exciting point in AR technology, where tactile, immersive and genuinely useful applications should replace gimmicks. We believe combining these emerging technologies with powerful storytelling will mark out the winners in the tourism sector going forward, and so we’re extremely excited to be working with EHC on such a landmark project.”

England’s Historic Cities is one of a number of successful projects to receive funding from the UK Government’s £40 million Discover England Fund. The Fund is administered by VisitEngland and England’s Historic Cities will be working with VisitEngland on a programme of activity to ensure that England stays competitive in the rapidly growing global tourism industry, by offering world-class English tourism products to the right customers at the right time. The Fund is a central government funded programme of activity, supported by match funding by partners in the public and private sectors.

England’s Historic Cities comprises Bath, Canterbury, Cambridge, Chester, Carlisle, Durham, Greenwich, Lancaster, Lincoln, Oxford, Salisbury, Stratford and York. In addition, the City of London, and emerging historic destinations, Truro and Worcester along with English Heritage, the Historic Houses Association and the National Trust, are taking part in this initiative. It is supported by long standing strategic partners to the consortium, UKinbound and London and Partners.