By newsroom on October 22, 2018Comments Off on Guns Or Knives Hijack Sneaker Vlog for Concern Worldwide

Guns or Knives have just launched a charity campaign with a difference. YouTube sneaker vlogger Seth Fowler reviews a shoe with an incredibly durable design, one that helps Concern Worldwide workers reach the world’s poorest people.

The 60-second ad, devised by winning-Young Lions Creative Team Eric Gasparro and Kieran O’Driscoll, opens on Seth Fowler reviewing a special new shoe – one most of us have never walked in. As Seth begins to review the white canvas sneaker, we realise there is a deeper story behind its make-up. 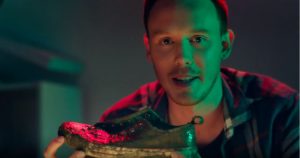 Cutting to a disaster scene, we see a field worker in Nepal using the laces of the sneaker to tie down tarpaulin that is sheltering a young family from a storm. As the review unfolds, we get a taste of the huge steps Concern Worldwide workers take to help people in disaster zones every day.

“Concern Worldwide’s donor base sits in a mature age bracket. As their donor base continues to age, it is important for them to engage a younger generation who will become future supporters. We set out to speak to this younger target audience in a language they would recognise. We know that they actively watch sneaker vlogs, to both educate themselves and engage with trends. This presented us with the opportunity to leverage an interesting angle and gain significant cut through. Additionally, we knew that in order to resonate with our audience, we needed to step away from the usual imagery associated with emergency work charities and try a fresh approach,” comment Creatives, Eric Gasparro and Kieran O’Driscoll

Eric Gasparro and Kieran O’Driscoll conceived the idea for IAPI’s Cannes Young Lions competition in March this year. Following a pitch to the client and previous Cannes Lions winners the pair were deemed the winners and were asked to make their idea a reality.

Concern Worldwide’s Director of Communications Sarah Martin said the campaign represented a departure from the aid agency’s traditional marketing approach and would play a key role in fostering the next generation of supporters. 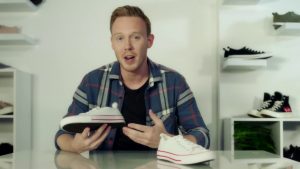 “This has been an incredible opportunity for Concern Worldwide and we couldn’t be more thankful to all involved for the stellar work that they have put into this over the past number of months. Our goal at Concern Worldwide is to reach the most vulnerable in our shared world and we are very excited that this creative concept will help us to cut through the noise and bring our message to a brand new audience.”

The film took over the entire ad break after RTÉ One’s national 6pm news on Friday 19th October and will run in Irish cinemas nationwide. The ad will be supported by digital and OOH campaign elements.

Guns Or Knives Hijack Sneaker Vlog for Concern Worldwide added by newsroom on October 22, 2018
View all posts by newsroom →