By newsroom on October 1, 2015Comments Off on Microsoft crowdsources fan ideas for the future of the NFL

Microsoft, an official sponsor of the US National Football League, is asking fans to submit ideas to improve the game for viewers and players in a new initiative called the ‘Imagine Bowl’.

Looking to improve the NFL on the field, at the game and for viewers at home, the tech giant is inviting innovators to submit an essay of under 3,000 words or a video under two minutes long about how they would bring about the future of the sport. 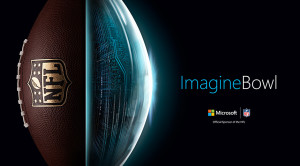 Looking to integrate technology with the NFL, those with ideas are encouraged to submit them here before 1 December to be in with a chance of a $50,000 reward or tickets to Super Bowl 50.

Jeff Tran, director of sports marketing and alliances at Microsoft, said: “We’re looking for ideas that will have a positive impact on the game either on the field, in the stadium or in the home. We’re always looking for new ways to improve the game through technology, and that is the true spirit of the Imagine Bowl, to go further than where we could have imagined.”

As the tech giant looks to increase fansâ€™ enjoyment of the sport, NFL is intent on growing its international audience with the BBC snapping up the rights to the UK coverage just last month.

Microsoft crowdsources fan ideas for the future of the NFL added by newsroom on October 1, 2015
View all posts by newsroom →