By newsroom on June 13, 2018Comments Off on New Balance Football stands out with ‘Make it to Moscow’ campaign

New Balance Football launched their  ‘Make it to Moscow’ campaign, an entertaining docu-series of content uncovering real football culture in four of Russia’s World Cup host cities. We see the world’s biggest game through the lens of real players and real fans in a series of challenges, interviews and games.

The series has been created and produced in collaboration with  ZAK, New Balance Football’s global creative agency along with media partner GOAL.com and follows the launch of the brand’s Russian inspired limited-edition Otruska Pack in May. 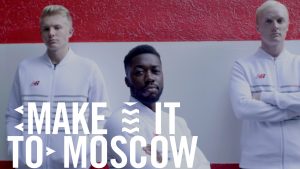 New Balance Football and GOAL sent three prolific YouTubers on a journey to uncover real football in Russia. Theo Baker, Charlie Morley and Jemel One Five together with Russian Vlogger Alex Zhuravlev travel across St Petersburg, Yekaterinburg, Kazan and Moscow to meet young fans, play against local teams in inner city korobkas and generally get up to a bit of mischief as they experience everything each city has to offer.

In Kazan, Theo Baker and Charlie Morley decide to challenge each other to chip balls over a 50-foot fountain. In an edgy housing complex on the outskirts of Moscow, Theo is surrounded by a group of locals before winning them over with a skills challenge.

In every city they visit, the boys play a game of 4 v 4 against a local team before selecting their best opponent to fly to Moscow to play in a Grand Final. The talented player they meet in Yekaterinburg had never left his city before but the boys convinced him to follow them to Moscow.

The series is a multi-channel, month-long campaign, with content appearing on New Balance Football social channels, the YouTubers’ channels as well as across Perform Group’s  GOAL.com global media network. The Moscow Final will be aired in the week of the World Cup Final in July.

Matt Bennett, Chief Creative Officer at ZAK commented: “We know that this audience wants to see more than just the traditional broadcast experience of the World Cup and just players and teams. Partnering with our YouTubers gave us a great opportunity to look at Russian Football from another perspective and create a real connection with the audience. As for the content, we want to give everyone an on-the-ground view of football culture in Russia and show the reality of the game, not just the gloss of the tournament.”

Kenny McCallum, General Manager, Football at New Balance said: “Approaching this tournament year, we knew we wanted to do something different. Building on our Fearlessly Independent campaign platform, we knew that this approach would be a great way for the brand to express its personality and do something unconventional. The end result is an engaging and insightful series, and we’re proud to have worked with ZAK, GOAL.com, Theo, Jemel and Charlie to bring this to life.”

New Balance Football stands out with ‘Make it to Moscow’ campaign added by newsroom on June 13, 2018
View all posts by newsroom →