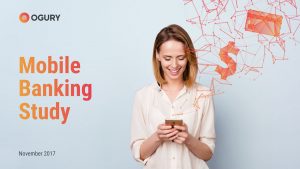 Ogury, the mobile data platform, released its Mobile Banking Study 2017 – an analysis of over 1,265,000 mobile users active during July – September 2017 in the US, UK, Germany, France, Italy and Spain.

The study reveals that UK fintechs are increasing their market share amongst mobile banking users, with 8.8% having downloaded at least one retail bank and fintech app during the period. Despite this, however, the UK’s adoption lags the US and Spain.

Of all fintech companies analysed, PayPal is dominant, suggesting that digital-payment services are currently doing more to disrupt the banking market than new challenger banks.

Barclays the most used retail banking app; Lloyds customers prefer to login on their mobile browser

Christophe Bize, VP Data and Mobile Analytics at Ogury, said: “Banking and handling money through mobile is now a daily reality for millions worldwide. While much of the media attention appears to be on challenger banks, digital payment services such as PayPal remain dominant, and the true ‘disruptors’. Other fintech companies have a long way to go before they match PayPal’s level of brand awareness.”

“In terms of fintech’s international scope, the US is the most advanced market, with more than one in ten US users visiting both a major bank and a challenger fintech website. The same was true for app downloads, with 12.4% downloading at least one from each category during the period. But the UK is catching up. We expect to see UK fintechs increase their share of app downloads at the expense of retail banks over the coming year, particularly as key challenger bank players like Monzo and Revolut apply for and achieve banking licences,” added Christophe.