By newsroom on September 21, 2015Comments Off on OgilvyOne UK Turns Football Stars Into Pub Signs for BT Sport 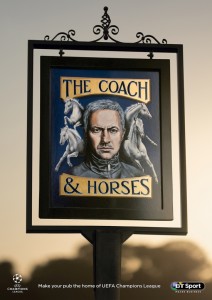 To celebrate BT Sport becoming the new home of the UEFA Champions League, OgilvyOne, the UK’s leading customer experience agency has created a series of specially designed and hand painted football-inspired BT Sport ‘Pub Signs’. The aim of the campaign is to illustrate the importance of football to the pub industry, and that BT Sport’s exclusive rights to broadcast the Champions League rights means business for pubs.

To achieve the authentic style of traditional British pub signs, each sign took two weeks to complete using oil on wood. The design concept for each sign is original and the background shots are of real pubs around London. 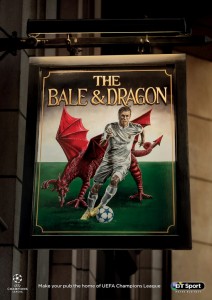 The pub signs feature the world’s best football talent with a twist on traditional pub names to raise awareness of BT Sport’s exclusive partnership with the UEFA Champions League amongst publicans and fans. 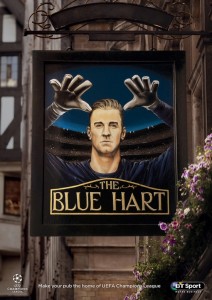 Jon Crownshaw, Head of Commercial Marketing, BT Sport, commented: “For the start of the Champions League we needed something that was really going to get noticed by pub landlords. Now that it’s exclusive to BT Sport, we had to show how important the competition is to pubs’ midweek trade. These signs did that perfectly, and looked fantastic to boot. The Lahm and Flag is a firm favourite in the office.”

Emma de la Fosse and Charlie Wilson, joint Chief Creative Officers at OgilvyOne Europe, Africa and the Middle East said: “To mark the launch of BT Sport’s exclusive Champions League live coverage, we wanted to create a campaign which looked at how integral football is to the pub industry. Signs we have developed join a long tradition of wordplay, folklore and intrigue. Combined with modern footballing references, they automatically become fun and engaging for fans and pub landlords.”

The BT Sport pub signs are being used as cover-wraps across trade and digital media. The campaign broke on the 16th July and will run throughout the tournament. The UEFA Champions League is on Tuesday and Wednesday evenings exclusively live on BT Sport. The first group stage matches are 15th/16th September. 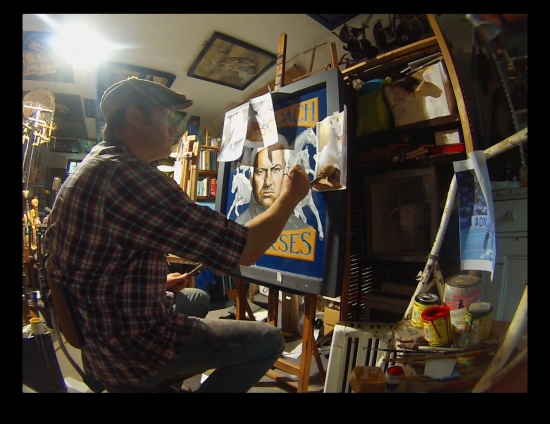