By newsroom on September 13, 2018Comments Off on Older women and menopause negatively stereotyped by the media, according to UM research 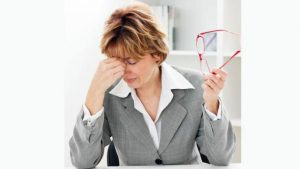 According to research released on September 12, nearly half (44%) of UK women aged 50+ feel patronised by advertising (compared to 31% of all women), while more than a quarter (27%) feel that ads contribute to creating and maintaining negative stereotypes of their demographic group.

Almost half (45%) of older women also agree that ‘society expects them to vanish from public life as they get older’, and this rises to 61% among menopausal women (defined as women who have begun or completed the menopausal transition).

The survey of 1,000 UK adults was conducted by media agency UM as part of UK by UM, its ongoing study of stereotypes in advertising. It found that a quarter (25%) of menopausal women say that the transition has negatively impacted their confidence or their relationships. In addition, 12% are no longer as sociable as they once were and 13% have felt its influence on their career. 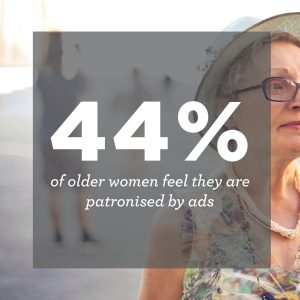 One in five of those women admit that they are struggling or have struggled with the menopause, but at the same time around half (49%) believe they would cope better if it were addressed more publicly in a positive way.

Menopausal women attribute the current lack of awareness to a lack of understanding (65%) and because people don’t talk about it (62%).  In fact, 13% of men admit they aren’t clear on what the menopause is and only two in five say they are comfortable talking about it.

Half of those going through the menopause don’t believe it has been authentically represented on any channel or platform in popular culture. Advertising is amongst the worst offenders: 74% believe ads fail to portray women in this phase of life with any sensitivity.

Chief among the harmful age-related female stereotypes is being portrayed as ‘out of touch with technology’ (42%). This is followed equally by ‘mumsy/frumpy’ and the mean-spirited ‘mutton dressed as lamb’ (each at 32%).  Six out of ten women aged 50+ believe society has a more forgiving attitude towards male aging. 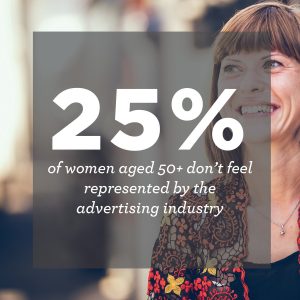 Sophia Durrani, managing partner, strategy at UM, says: “The ad industry is in a uniquely powerful position to reclaim the menopause and female ageing from the shrouds of mystery and shame. With around half the UK’s adult population now aged 50 or over, and more women than men, there has never been a better time for brands to embrace and celebrate the maturing population. Our industry isn’t best known for its worthiness, but now’s the time to break the silence and produce work that really makes a positive social difference.”

The study also found that advertisers ignore and misrepresent older women at their own peril. It revealed 20% of menopausal/post-menopausal women believe it has positively affected their ability to relax and indulge in leisure activities. There are numerous market segments that could stand to benefit: around a quarter of women indicate they have spent more time and money on personal care, skincare, exercise, health supplements and travel since onset of the menopause.

Durrani adds: “Talking to menopausal women in a way that doesn’t immediately stereotype and offend them has huge commercial potential for brands. Not to mention that six out of ten women believe advertising plays a role in challenging stereotypes in society more broadly. Despite some recent powerful and award-winning campaigns, female audiences want more accurate and sympathetic reflections of women like them in all their many roles and in every stage of their lives.”

Older women and menopause negatively stereotyped by the media, according to UM research added by newsroom on September 13, 2018
View all posts by newsroom →