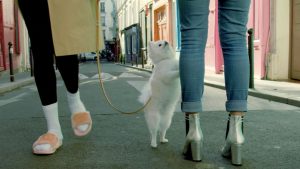 The Sarenza ‘Boots 2018’ digital campaign is based around two films (15 “& 20”) which unravel the mystery about what makes dogs pull frantically on their leads, or pounce on passers-by in the street.

There can only be one explanation, that the unfashionable shoes of their owners are harming their image. Sarenza, one of the most popular brand amongst  French shoe-lovers, suggests trying out its new collection of boots so that dogs can once more feel proud alongside their owners.