By newsroom on October 18, 2017Comments Off on Time Out and Lexus say “Yes to the city” in new campaign 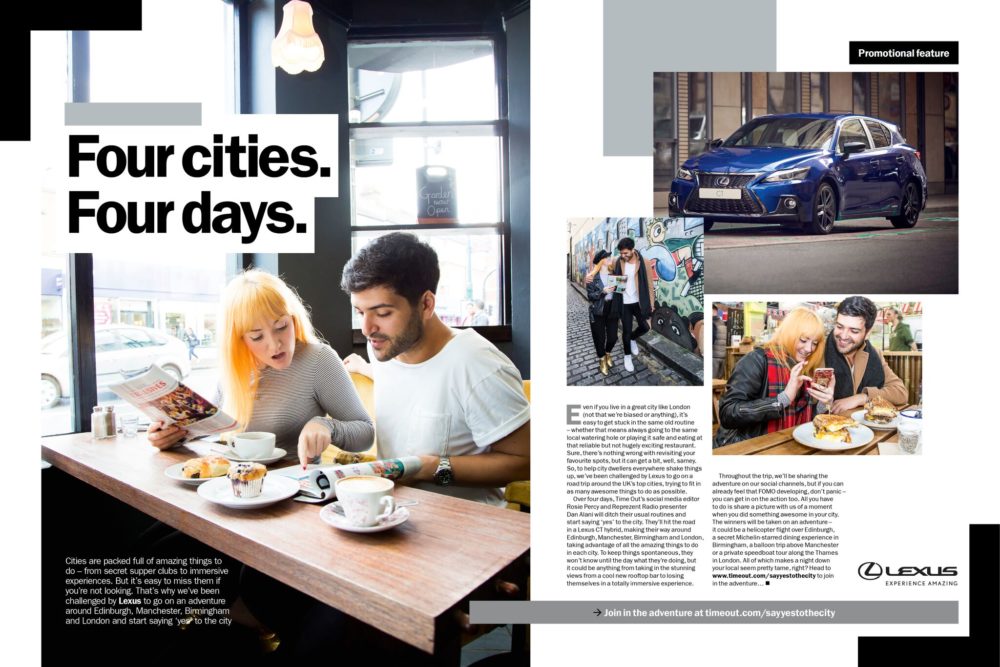 The&Partnership will this week launch a new pan-European campaign, ‘Say Yes to the City’, for Lexus’ self-charging CT hybrid – showcasing how the luxury car’s compact design and impressive fuel economy make it the perfect vehicle for busy urbanites keen to make the most of what their city has to offer.

The campaign will launch in the UK with a unique, editorially-led media partnership with Time Out, the global media and entertainment brand that inspires and enables people to make the most of the city, delivered by The&Partnership’s cross-discipline team of creatives at CHI&Partners, media planners at m/SIX and Time Out’s Creative Solutions team.

As part of the partnership, Time Out’s Social Media Editor Rosie Percy and her partner, radio presenter Dan Alani, will take on the challenge of packing in as many of Time Out’s recommended activities as possible across four UK cities in the same number of days – relying on the Lexus CT Hybrid for transport.

In an action-packed four days, the couple will take on Edinburgh, Manchester, Birmingham and London – seeing just how many of Time Out’s recommended local best things to do they can fit into a single day in each metropolis.

Time Out and Lexus will document the challenge through a co-branded digital and social video series, supported by live updates across Time Out’s regional city social pages – including Facebook, Instagram and Twitter, with a total of 3.2 million followers – its high-traffic website, and through a series of advertorial features. A teaser video was released to Time Out’s social audience, encouraging them to tune into the action, supported by a double-page spread in this week’s Time Out London magazine.

The action will then unfold from this Friday when Rosie and Dan will explore Edinburgh, followed by Manchester on Saturday and Birmingham on Sunday – all captured in a series of highlights videos. Then next Tuesday, as the London challenge kicks off, the activity will be signposted to Time Out’s print readers via a premium cover wrap in the magazine. Readers will also be invited to enter a competition to win unique and exciting experiences in their home city, with transport provided by the new Lexus CT.

Time Out London Social Media Editor Rosie Percy said: “Time Out has been inspiring and enabling people to make the most of the city for nearly fifty years so when a brand like Lexus launches a campaign challenging people to say ‘yes’ to their city we’re the first to join in. We’re really excited to partner with Lexus to deliver this message in a new and exciting way. By hosting these adventures on Time Out’s social channels, we’re connecting with an engaged audience of over three million people, showing them how to experience the best of the city simply with a scroll of their thumb .”

The 45” TV commercial, directed by Jovan at Stink, takes viewers on a fast-paced journey through an impromptu night out after work, made possible by the Lexus CT Hybrid. As the couple move seamlessly from experience to experience, gliding from scene to scene in a series of slick transitions, the pace intensifies, punctuated by a series of ‘snapshots’ of their evening.

Micky Tudor, Joint Executive Creative Director at CHI&Partners, said: “This is a really exciting campaign, both for The&Partnership and for Lexus, marking the brand’s most innovative media partnership to date. Our creatives at CHI worked closely with m/SIX and the team at Time Out to collaborate on this real-world reimagining of our superbly fast-moving ‘Say Yes to the City’ TV advert – and we can’t wait to track Rosie and Dan on their action-packed mission across the UK.”

Lisa Fielden , Manager, Brand Communications at Lexus UK, said: “We’re proud to launch our self-charging CT hybrid campaign– this is a gateway model for the Lexus brand, and the perfect car for busy city-dwellers and sightseers with packed social calendars, who want to miss out on nothing. We love how this campaign from CHI and m/SIX really taps into the mindset of saying ‘yes’, bringing it to life and sharing it with our audiences in the UK and across Europe.”

Time Out and Lexus say “Yes to the city” in new campaign added by newsroom on October 18, 2017
View all posts by newsroom →