By newsroom on July 9, 2018Comments Off on Toyota Celebrates a Sedan Serious About Play: the All-New Avalon 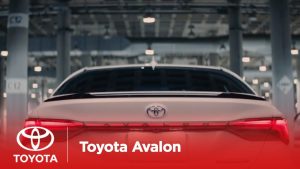 Today Toyota launches a national marketing campaign, titled “Serious Play,” for the all-new 2019 Avalon that dares drivers to experience adventure, spontaneity and playfulness, and reminds all that the thrill of driving is the real prize. The campaign drives home the notion that the completely redesigned Avalon has everything drivers need to get more out of life.

Two of the “Serious Play” campaign’s national 30-second TV spots, Let’s Race and Trojan Horse, were directed by renowned director Craig Gillespie, most recently known for the award-winning film “I, Tonya.”  A third bold and daring 30-second spot, Catch Me If You Can, was directed by Daniel Azancot. The commercials were developed using multicultural insights aimed at a transcultural audience. The campaign also includes a series of digital videos including Roundabout, River Run, Scavenger Hunt, Waiting, Hybrid at Play, Musical Play, Performance Play, Group Play, Connected Play and Simon Says created to tell stories of an impulsive quest for adventure.

The fully-integrated campaign was developed between two of Toyota’s agencies of record, including Saatchi & Saatchi and Burrell Communications.

Toyota Celebrates a Sedan Serious About Play: the All-New Avalon added by newsroom on July 9, 2018
View all posts by newsroom →