By newsroom on April 27, 2018Comments Off on VCCP Spain presents “Maillot 45” campaign for Génesis Seguros

VCCP Spain today launched a new campaign “Maillot 45” for GÃ©nesis Seguros, one of the leading insurance groups in the world.

“Maillot 45” is the first cycling jersey that warns drivers about the need to reduce their speed, cleverly using the same signal recognition system they have in their cars.

Cyclists are considered the most vulnerable group on Spanish roads with a very high accident rate: more than 3,000 accidents in 2017. 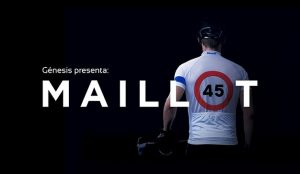 enables a cyclist to act as a moving signpost, being automatically detectable by the signal detection systems on new car models. The system recognises the jersey up to a distance of 100 metres, and warns the drivers with a luminous screen icon or by automatically adapting the speed to 45 km/h.

Julia Calvo, Brand Manager at Liberty Seguros explains: “One of our Corporate and Social Responsibility commitments is enhancing road safety, so as Genesis we wanted to launch â€œMaillot 45â€ because we believe that making the road a safer place is a smart decision. What we are looking for with this campaign is greater awareness amongst drivers in order to improve cyclist safety.”

Beto Nahmad, Executive Creative Director of VCCP Spain added: “Every day there are more cyclists on the roads and car drivers do not always know the speed limits when approaching and overtaking cyclists. That’s why “Maillot 45” is the first initiative that makes the speed limits visible on driverâ€™s car dashboards, turning a cyclists jersey into a sign itself. This way we help drivers to reduce their speed around cyclists down to 45 km/h in a smart way.â€

VCCP Spain has been working for GÃ©nesis since 2014 and from 2016, is also responsible for the communication of all Liberty Group brands: GÃ©nesis, Liberty and Regal.