By newsroom on March 21, 2016Comments Off on Visa Europe focuses on Rio 2016 with ‘Heart of the Olympian’ drive

Visa has hit home its partnership with the Olympics with a new campaign called Heart of the Olympian.

Looking to drive awareness of Visa’s sponsorship and generate excitement ahead of the greatest sporting event on earth, the video focuses on the metaphorical and literal heart strength required to take gold.

The film, directed by Juan Cabral and formulated by Saatchi & Saatchi London, sets the scene five months before the launch of the competition. 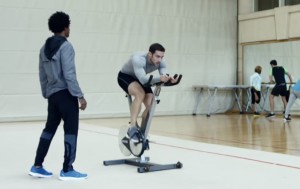 As an Olympic sponsor, Visa Europe can bring fans closer to the heart of the Games in Rio. Visa is the beating heart of payments – our system never stops and works whenever and wherever it’s needed. Just like the Olympians that will compete in the Games this summer, Visa is always on and ready to perform. This film is a celebration of that synergy.”

A 90 second version of the film will be shown in participating cinemas in the UK, also running across channels including Facebook, Twitter, YouTube, created especially for the campaign.

Visa Europe focuses on Rio 2016 with ‘Heart of the Olympian’ drive added by newsroom on March 21, 2016
View all posts by newsroom →