By newsroom on April 19, 2018Comments Off on WARC 100: Lessons from the world’s top effectiveness campaigns revealed 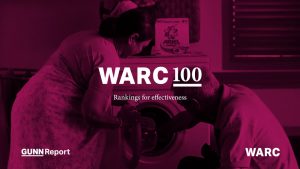 the global marketing intelligence service, has released ‘Lessons from the world’s top effectiveness campaigns’ to uncover shared creative, media and measurement strategies. The report analyses the results of the latest WARC 100, an annual ranking of campaigns based on their performance in effectiveness awards from around the world.

Analysis of campaigns in this year’s WARC 100 reveal the increasing use of PR in their channel strategies. This reflects the rise of creative ideas built to gain press coverage and other earned media. Several ideas at the top of the ranking centre around a highly PR-able stunt or concept, like the Transport Accident Association’s ‘Graham’, that can generate content across channels and media.

This year a dominance of video – both online and TV – is evident in the winning campaigns. Analysis of campaigns led by TV and campaigns led by online video show they are key to emotional creative strategies. Budgets tend to be higher for TV-led campaigns, and the media mix differs between the two groups as a result. Though social media is the most common support channel regardless of lead media, OOH and print are more commonly present in the mix of TV-led campaigns, with word-of-mouth and PR supporting a higher proportion of online video-led strategies.

3. The use of partnerships is on the rise

Over the past two years, the use of partnerships as a creative strategy has increased in WARC 100 campaigns. Utilising the reach or credibility of partner organisations was an effective strategy for four of the top 10 campaigns this year, with both expected and unusual partnerships seeing success. Though seen across the whole WARC 100, partnerships saw particular use in campaigns targeting millennials, like Burger King’s ‘The McWhopper Proposal’.

4. Brands are looking for multi-year platforms

Long-term ideas are a growing feature of the WARC 100 as brands look to squeeze more out of their platforms. The continuing presence of the John Lewis Christmas campaigns in the WARC 100 provides a great case for the success of long-term campaigns. John Lewis has taken the Christmas period and turned it into an advertising event, annually driving huge amounts of publicity, engagement and ultimately return on their investment. Two further top 10 campaigns for Ariel and Snickers have reworked or evolved ongoing campaign themes with success over the past year, using the power of association to grow and reinforce the memory’s perception of brands over time.

David Tiltman, Head of Content, WARC, says: “This year’s analysis of the WARC 100 reveals some major long-term trends in effective advertising. Brands are increasingly looking for ideas with high PR impact, and marketing platforms with potential to run across multiple years – and with budgets under pressure in many markets, those trends are set to continue.”

The WARC 100 is now part of the Gunn Report, which tracks the winners’ lists from all the most important advertising award contests, globally. The results of 70+ effectiveness competitions are used to compile the WARC 100, which now in its fifth year, is built on a rigorous methodology, developed in consultation with King’s College London. The methodology is applied consistently across all global, regional and national competitions tracked.

WARC 100: Lessons from the world’s top effectiveness campaigns revealed added by newsroom on April 19, 2018
View all posts by newsroom →