By newsroom on September 20, 2018Comments Off on William Hill bets on first ever dynamic DOOH campaign to celebrate Anthony Joshua signing 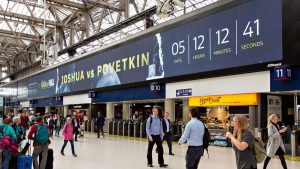 William Hill, one of the world’s leading betting and gaming companies, has this week launched its first ever dynamic digital out-of-home (DOOH) campaign to promote its partnership with new brand ambassador, the unified world heavyweight champion boxer Anthony Joshua OBE.

The British sporting icon recently signed an initial one-year deal with William Hill to become its global brand ambassador, representing the bookmaker and featuring in marketing campaigns over the next year and beyond.

The campaign, developed by OOH and location marketing specialist Posterscope in collaboration with Vizeum UK, launches as Joshua readies himself for his bout against Alexander Povetkin on 22 September where he will defend his WBA, WBO, IBF and IBO world titles in front of 90,000 fans at Wembley Stadium.

With the goal of building excitement and anticipation in the run up to the fight, the creative executions feature footage and imagery of Joshua alongside a live timer counting down to the main event.  The campaign appears on some of London’s most iconic and most desirable OOH formats, including full motion sites at London’s Waterloo, Euston and London Bridge stations, as well as across a number of Transvision screens and rail digital 6 sheets chosen for their high footfall station placements. 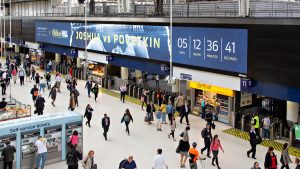 Andy May, Global Brand and Marketing Director at William Hill, said: ”William Hill is delighted to be an Official Partner of Anthony Joshua and we wanted to communicate this widely using some iconic imagery of the unified heavyweight champion of the world. The digital OOH campaign has generated great awareness of the partnership with AJ and of his big fight on Saturday which we know will be a massive betting event for our customers.”

Mike Skene, Client Strategy Director at Posterscope, added: “William Hill wanted a knock out campaign to support Anthony Joshua in his title defense this weekend and the high impact digital OOH locations and environments we’ve selected provide the perfect canvas to do this.  We are always excited to bring a new client to digital out of home, especially when they are so open to capitalising on all its capabilities, and we are delighted to be able to play our part in supporting our world champion.”