By newsroom on May 9, 2013Comments Off on BT Sport service will be free for broadband customers 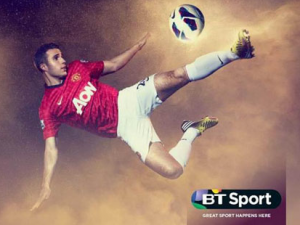 BT has ramped up its marketing campaign for its new Sky-rival BT Sport service, which offers 38 exclusive Barclays Premier League and Scottish Premier League matches, by announcing the service will be free to BT broadband customers.

BT Sport 1, BT Sport 2 and ESPN will also provide coverage of the FA Cup, Europa League, Bundesliga and Serie A, as well as rugby union coverage.

The channels will have exclusive rights to 18 ‘top pick’ football games and 69 live Aviva Premiership rugby matches, previously shared between Sky Sports and ESPN and from 2014 the service will provide coverage of MotoGP, again with exclusive rights.

The news will further heat up the competition between BT and the UK’s long-standing sports broadcaster, Sky, which has already refused to run any adverts for the new service during any of its own sports coverage.

BT chief executive Ian Livingston said: “UK sports fans have had a rough deal for too long. Many have been priced out of the market but we will change this by giving away BT Sport for free with our broadband. Sports fans are the winners today.”

BT has signed up Spurs star Gareth Bale to be at the forefront of marketing campaigns for the next three years, alongside Manchester United’s Robin van Persie, Liverpool’s Daniel Sturridge and England goalkeeper Joe Hart.

BT Sport service will be free for broadband customers added by newsroom on May 9, 2013
View all posts by newsroom →