By newsroom on December 6, 2017Comments Off on CALIDDA’s innovative OOH campaign uses Lima’s air pollution to make a point

McCann Lima has released “Lima Is Talking,” an innovative out-of-home (OOH) advertising project that collected actual air pollution to communicate the hazards of automobile pollution and promote the benefits of natural gas.

According to the World Health Organization, Lima is the second most-polluted city in Latin America. To promote the benefits of natural gas to mitigate the problem, advertising agency McCann Lima worked with Peruvian gas company CALIDDA to create an innovative marketing campaign that gives a voice to Peru’s capital. In the campaign, Lima appeared to literally write a message to local residents about how difficult it has become for it to breathe.

The campaign innovation was to attach a device to a prominent outdoor ad location in one of Lima’s busiest traffic locations. The device in the billboard unit collected CO2 pollution from the atmosphere. The unit stored the CO2 gas, then processed it into a powder. In the transformation process from gas to powder, the powder acted as an ink and was manipulated to slowly write a message on the outdoor billboard, which began as a blank canvas. After 15 days of this process, the billboard broadcast the final message: “It takes me a lot to breath”. 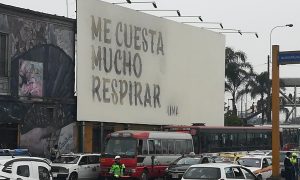 This message was literally written with air pollution.

The experiment was recorded and the online film was shared across social media platforms. The air pollution powder was packaged in the media kit and sent to influencers and the press, along with an invitation to the public to debate Lima’s appalling air pollution.

“With this initiative, we wanted to raise awareness around air pollution and engage citizens in the pursuit of solutions. Besides, we offer the natural gas option as a less polluting fuel,” said Amadeo Arraste, Calidda’s Regulation Director.

Mauricio Fernández-Maldonado, the creative EVP for McCann Lima creative EVP, said: “The outdoor was installed in one of Lima’s busiest traffic points, Abancay Avenue, so that we could reach the largest possible audience, while showing the concrete result of fossil fuels.”