By newsroom on April 25, 2016Comments Off on Clash of Kings invites gamers to ‘Fight like a King’

The TV ad campaign, which breaks during the season 6 premiere of Game of Thrones, will benefit from The Specialist Worksâ€™ pioneering TV for Apps system, a state-of-the-art app download attribution method whereby it can monitor second-by-second downloads, driven by the TV ad.

Not only does TV for Apps have the ability to monitor at what point a player downloads the game, but it can also track where they re-engage or start in-app purchases – these activities can be tracked, measured and optimised.

As the TV ad airs, the multi-platform campaign breaks across video on demand, mobile, tablet, rich media and online display, as well as Game of Thrones fan sites. There is a 30â€ cinema campaign plus a 60â€ Cinema Gold Spot during the Warcraft movie from 3rd June until the beginning of July. 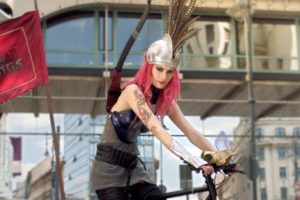 The comprehensive campaign will also run across key London Underground sites, including an immersive 360 wrap at Oxford Circus underground tube station featuring graphics on the floor, walls and ceiling in May. There will also be a series of experiential activities led by Wasserman.

Jim Lewcock, CEO and Founder at The Specialist Works said: â€œThis comprehensive campaign, working with multiple partners, has resulted in a highly targeted multi-platform activation. Our planning and attribution system will ensure we reach the key target male 25-44 demographic.â€

Qianya Liu, Overseas Marketing Manager at Elex-Tech said: â€œClash of Kings is a key game for us and I am delighted with such an intelligent, well thought out and highly targeted campaign.â€

The Specialist Works were responsible for strategic planning, buying and measurement. TV, cinema, video on demand and online video by AV creative agency, Wordley, OOH by Sharp and ongoing events and stunts led by Wasserman.

Clash of Kings has won Facebook’s 2015 Game of the Year.

Clash of Kings invites gamers to ‘Fight like a King’ added by newsroom on April 25, 2016
View all posts by newsroom →