Cossette and VIA Rail Repurpose the Past to Move Forward

By newsroom on June 18, 2018Comments Off on Cossette and VIA Rail Repurpose the Past to Move Forward

In celebration of VIA Rail’s 40th anniversary, the Canadian railway company, together with Cossette, launched the Canada-wide VIA40 campaign and contest with a historic twist.

Together, they created tickets upcycled from the steel of a major part of VIA Rail’s history to mark the milestone. VIA Rail is reusing its past to propel 40 lucky participants toward a more sustainable future by melting the truck of a train that had recently been removed from service and destined for the scrap heap. The truck was part of a railway car that had travelled over six million kilometres, which is equivalent of travelling across Canada more than a thousand times.

“To celebrate our 40th anniversary, nothing could have been more fitting than literally transforming an iconic part of our history, and in doing so, repurposing the past to move forward, towards a more sustainable future. It was a compelling idea steeped in symbolism, yet bringing it to life was a considerable challenge. The entrepreneurial spirit of the teams at Cossette and here at VIA Rail played a key role in it all coming together,” added Ann Bouthillier, Chief Communications Officer at VIA Rail. 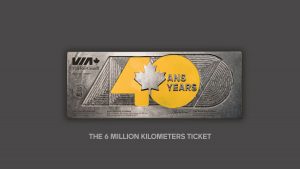 This initiative was carried out in collaboration with ArcelorMittal Long Products Canada where the video was shot at its Contrecoeur facility in the province of Québec. The beautiful behind-the-scenes imagery really captures how monumental the process of melting the train car down was, and how symbolic the tickets are of passing the historical torch to the next generation of riders.

“To come up with new concepts, you sometimes have to step away from your computer and connect with the product. Members of our creative team rode the train from Montreal to Toronto and back to do some brainstorming. The idea came to us on the trip back, just outside of Kingston,” shared Gilles Legault, Assistant Creative Director.

The contest will gift 40 Canadians with two cross-country return trips. The tickets, forged from the past, will allow VIA Rail’s past to live on, while the contest winners will create their own stories to be told for years to come.

Cossette and VIA Rail Repurpose the Past to Move Forward added by newsroom on June 18, 2018
View all posts by newsroom →