By newsroom on November 12, 2018Comments Off on Direct Line shows parents and young drivers the way to get off each other’s back

The two edits playfully show the scenarios of a boastful young driver and a worried parent interacting. In both cases, as the two characters argue, the camera pans out to reveal that they are physically joined to one another, literally living out the notion of ‘being on each other’s back.’ 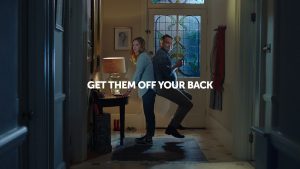 Balancing the annoyance drivers under the age of 26 provoke in their parents, with the irritation their parents generate through their constant worry, the edits present Direct Line and its DrivePlus black box as the solution for both sides. The box allows parents to monitor their kids’ driving whilst letting young drivers prove their driving skill with reliable statistics.

The DrivePlus box monitors driving activity and measures driving safety based on factors including speed, smooth driving (acceleration/braking) and time of day. If drivers score well enough on the DrivePlus box they may qualify for a discount on their renewal at the end of the insurance policy’s term.

The campaign will roll out across YouTube and social, from Monday 12th November with two 15” and 6” edits. The media buying was carried out through MediaCom.

Wendy Moores, Head of Marketing, Direct Line said: “Parents have always been concerned about their children starting to drive but are also thrilled to see them gaining their independence; it’s a weird paradox that parents do and don’t want to see their children driving. We wanted to capture their anxiety and reassure them that with Direct Line, their families are in good hands. The campaign highlights our focus on giving young drivers the freedom they want coupled with the reassurance that they have an insurance policy that can change or grow with them.”

Direct Line shows parents and young drivers the way to get off each other’s back added by newsroom on November 12, 2018
View all posts by newsroom →