By newsroom on April 17, 2018Comments Off on Fred & Farid Los Angeles unveils “Ocean Miner” for the Tara Expéditions Foundation

FF Los Angeles unveiled the “Ocean Miner” project for the Tara Expéditions Foundation: an innovative system somewhere between blockchain and land art that gives the ocean the opportunity to produce Bitcoin to finance its own preservation.

The Tara Expéditions Foundation travels the world’s seas with scientists on board its schooner, Tara. For 15 years, Tara has been proactively studying and understanding the ocean to better preserve it from climate change. Its mission is essential but is often confronted with the difficulty of engaging the general public, politicians or the investors necessary to finance marine research.

The environment represents less than 3% of donations to charities. The Tara Foundation team has therefore developed – with FF Los Angeles, a creative agency founded by Fred & Farid – a system called “Ocean Miner”: a new hydraulic turbine system, installed in the Gulf of Morbihan, in Brittany, France, where marine streams and tides are at their strongest.

This turbine is naturally driven by stream action, converting the energy from the ocean into electrical energy. A computer operating in Mining, i.e. the generation of Bitcoins, has been wired to this unit. The generation of this crypto-money via mining is a computerised process for accounting trades in the public register of transactions (carried out with what is referred to as the Blockchain).

In return, each registered operation generates a margin of Bitcoin for the owner of the computer. This digital currency is then convertible into Euros and can, therefore, immediately be re-invested in ocean research. 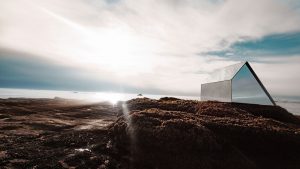 The computer and its components were set up in a small house equipped with mirrors, thus downplaying the visual impact of its implementation on the Brittany coast and also protecting them from the weather. After the house was locked and connected to the turbine, the system was autonomous and self-sufficient, using the power of the ocean to create its own energy.

A System Able To Produce Crypto-Money 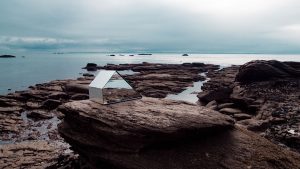 After a month of running the turbine and generating Bitcoin, the “Ocean Miner” system made it possible for the Tara Foundation to collect nearly 0.0015414 BTC / day, or 200 € / month over the whole implementation phase.

“This system certainly won’t cover the needs of the scientific research, it is only a drop in the ocean: a minimal symbolic contribution made to the expeditions led by Tara. It is, however, a powerful way of recalling that only the mobilization of everyone together will make it possible to fund the research to study, understand and to better protect the Ocean in the future,” explained Romain Troublé, Managing Director of the Tara Expeditions Foundation.

FF Fights For The Protection Of The Oceans 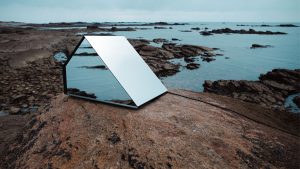 “Over the years, FF has been actively involved with a series of creative social responsibility projects ranging from refugees to social advocacy, the environment, and beyond. Today, we’ve decided to focus our creativity on a place of huge importance that doesn’t get the attention it needs: our oceans.  The 4 offices of the network are each creatively committed to this cause like FF New York and FF Shanghai with Sea Shepherd or FF Paris with Noé – and today FF Los Angeles with the Tara Foundation. We are eager to select one great cause, only one and to go deeper knowledge of the topic campaign by campaign.  We’re partnering with a selection of brands and charities to find creative ways to protect the ocean and clearly communicate its vital importance to our lives. It is the place where we feel we can make the largest impact for the world,” explained Fred & Farid, Founders of FF (Los Angeles, New York, Shanghai, Paris).