By newsroom on April 1, 2018Comments Off on Jameson Launches Space-Aged Whiskey

Jameson has launched Jameson Space-Aged, a brand new product that uses an ageing method that is out of this world. For over two centuries Jameson’s Master Distillers have shown an almost limitless commitment to creating great tasting whiskey, but their ambition has only ever been held back by one thing – the Earth itself.

To be called an Irish whiskey a spirit must spend a number of years maturing in Ireland and for over two centuries Jameson’s Master Distillers have religiously adhered to the processes that John Jameson established in 1780. But once this period had passed the Irish whiskey can travel. In their pursuit of creating an entirely new taste profile the Master Distillers have taken this opportunity to new heights. 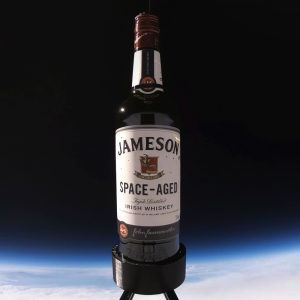 Jameson Space-Aged has been traditionally aged in Midleton, Co. Cork but it was then launched into outer space to finish the maturation process. The combination of altitude, pressure, and solar radiation transforms the liquid in a bottle of Jameson Original into an even more exceptional whiskey that has a taste that is genuinely out of this world.

The launch of Jameson Space-Aged will usher in a new dawn of whiskey excellence, befitting of a brand that has been committed to taste since 1780. For over two centuries Jameson has been aged in Ireland, but 2018 marks the evolution of the Jameson’s world famous smooth taste, proving that reaching for the stars can pay off.

Jameson lovers will need to act fast though as there will only be 1780 bottles of Jameson Space-Aged, paying homage to the year the Jameson Distillery was established in Dublin. This extremely limited release will be available for purchase from April 2nd.