By newsroom on June 30, 2017Comments Off on Jason Romeyko Reveals His Blueprint For Serviceplan Going Forward 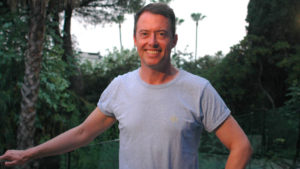 We had a chance to sit down with Jason during the Cannes Lions Festival and speak about what his vision is for the Group going forward:

Q) Take us through your journey from Australia to becoming the WWECD at Serviceplan?

A) I used to host a kids television show, but I realised that I couldn’t be the best on TV, so I moved into advertising. As a child I spent time in Europe going to school and my parents always fostered this thing about being International.

Growing up, thanks to my father, we had something like 20,000 books at home and he used to make us analyse famous historical events from various different angles and cultural view points. I find that is very much the same with advertising, when I’m looking for something like an insight I draw from all of those different cultures and backgrounds so there is a lot of empathy that goes into that.

Now if I look at myself, I’m 45 and have lived in so many countries around the world. I feel like everything has driven me to this moment. Before with Saatchi & Saatchi, I had team instructional responsibility but I was running global accounts. So now for me it’s actually connect and bind a global network, is really cool and Serviceplan is very energetic! I think it’s very uber creative and it’s one of those things where everyone is trying to do something cool.

Serviceplan is so non-traditional, everyone has a traditional background in some way or a digital background but actually their thinking is very entrepreneurial. So my opportunity now is about connecting the cultures and I am really into diversity. I am trying to bring people and have them collaborate with Germans, French people, Spaniards etc, because very often agencies just stick to their own territory. I think the strength of a small network, although it is the biggest independent network in the world, is collaborating together.

Q) You mentioned your stint in Saatchi & Saatchi and you had tremendous success there with Deutsche Telekom, Can you briefly touch on that?

A) Yes, sure! I was really privileged to worked as the Head of Creative Output for Deutsche Telekom, at the time when we created Life’s for Sharing. My colleagues in London did the one in Liverpool Station, but I was really lucky to be a part of the Trafalgar Square spot.

I’ve had the pleasure of working on Angry Birds live, Katy Perry’s firework video clip, the five-city simultaneous holographic concert with Mariah Carey for Christmas… or breaking real thought leadership topics like ‘Sharing Economy,’ which no one was talking about at the time. That’s been wonderful!

With Sea Hero Quest, which was the recent success story, It’s really special because we started with the insight that there are three billion hours of wasted time on gaming every week, but what if we could purpose that game time into something positive? That’s when we partnered with the Alzheimer’s Research UK and with different universities trying to actually create the incredible thing that we have.

We have actually moved scientific research on Alzheimer that was 100-years behind Cancer! We gave them 12,000 human years of data and this whole technology of Sea Hero Quest is being used for analytics on Cancer, on HIV, everything. So it’s actually revolutionised the way research it’s done for medicine.

Q) Moving back to Serviceplan, what is your vision for the agency going forward?

A) My vision for Serviceplan is to make it the most uber creative house of communication in the world. One that builds the best brands and is just a fun place to work!

A) When I started in the business as a writer, the Industry was all about print ads and a lot of TV. When I think about late 90s I thought oh wow digital is coming, I’m totally going to be out of the job, and I was wrong! Actually film is stronger than ever!

I was with Google at a session in Cannes, and they were already talking about six second spots, which for me doesn’t sit very well, because it becomes memos to consumers. They don’t become real engaging things that build brands. You just have to pay a lot of money here, there and everywhere to make people see it.

Where I see the Industry going is something that I already did with Deutsche Telekom and with GSK… for me it’s all about collaborations. The pivotal moment when I worked with Katy Perry… you take a superstar, you take all of her fan base and you bring them together with a client. That’s cool! And great things happen when people start to share. That’s how I like to work.

It’s like musician, you sit down and you jam a bit, it’s cool great things happen. We did a session here (in Cannes) a few days ago for Becks and I have this thing where you get people from different cultures in one place, you pull them together and then you give them 20 minutes to answer a brief. It’s brutal! So they worked like that for four hours and we generated some incredible work for Becks.

So, I see this real richness in collaboration and for me with the role of Serviceplan – what makes it different to any other role out there right now – is that I also have media, I am responsible for the creative media output, the design, PR, where everything else is isolated everywhere else. So I think if I can get everybody collaborating when everyone is talking about integration that’s fine, but they have to pick up the phone and call somebody and then it’s always a different agency having to come in. But if I can orchestrate or conduct a group of people in one space, then really we can create really phenomenal solutions.

Q) We are of course at Cannes, celebrating creativity and Innovation… what was your favourite project from the past year?

A) My absolute favourite project of the whole festival is Fearless Girl. And it’s not because it is a Grand Prix winner, even if it didn’t win any awards I think it’s wonderful because we need to elevate this discussion about diversity in the work place, regardless whether it’s females, gays, transgender, whatever… we need to elevate this discussion!

Fearless girl was a very old fashioned piece, it was something that could have been done a 100 years ago. But what makes it brilliant, is that it is tangible and I can interact with it, and it really sends a message to the world. In collaboration with the bull, I just think it’s phenomenal!

Q) What is the one trend from the Industry that really excites you at the moment?

A) I don’t know, I don’t really see any trends. For me it’s about surfing. I’m Australian… my brother is a great surfer and I’m a really bad surfer! But I am really good a multi-platform surfing. So for me it’s always about riding the wave when it comes up. It is not about one particular trend, it’s about capturing a number of particular things and then just surfing the waves, having a really good time!

I think clients and consumers, are thrilled. We are not invited into their homes, so we have to really excite them because we owe them that much. I think that surfing these platforms, it’s a really nice way to appease them.

Q) Talking about ‘Surfing the platforms’ and omni-channel opportunities… do you think its time agencies and brands move away from the ‘TV first’ mindset that they have and begin building campaigns more around these digital tools?

A) I have been working like that for a decade! I would encourage clients who aren’t doing that to really think about the idea. I was brought up in the industry by legends like Bob Isherwood and John Pallant. It’s all about the idea at the end of the day, and if we decide to launch an idea via PR then, that is the best way to do that. Brands are not built by agencies and they are not built by a marketing department… they are actually built by consumers.

Q) What advice would you give to a young creative?

A) There is a lot of discussion about Millennials or Generation Z… My advice would be that it doesn’t matter how talented you are, you have to work harder than everyone else.

You can hear the full interview with Jason below:

Jason Romeyko Reveals His Blueprint For Serviceplan Going Forward added by newsroom on June 30, 2017
View all posts by newsroom →