By newsroom on November 5, 2015Comments Off on New Unicef UK film shows exploitation and abuse children suffer in wars and crises

Unicef UK is launching a powerful new film created by Don’t Panic London highlighting the charity’s work for children in conflicts and emergencies.

The film coincides with a new Unicef report showing that the number of children who have sought asylum in the European Union has almost doubled compared to the same period last year. Unicef is calling on the UK government to prioritise protecting children from violence at a time when children are facing more devastating wars and disasters than ever before and one in ten of the world’s children is growing up in a conflict zone.

Don’t Panic’s emotive film for the charity shows a British family having a day out at the park. The mum and dad sit watching their children play; dangling upside down from a climbing frame and doing headstands. But each time one of the two children spins upside down, their world turns upside down with them, and we see a glimpse of the very different life they could be living in a country affected by war or natural disaster.

We see scenes that mirror real stories documented by Unicef of children suffering from violence, exploitation and abuse, and in need of protection. As the film progresses, we see the children’s world getting darker, and the parents getting more and more distressed as they realise the danger the children face. It closes with a little boy sitting down on the railway tracks he has been following, worn out, shivering and alone as winter and darkness closes in – an all too familiar scene for millions of children escaping danger this winter. 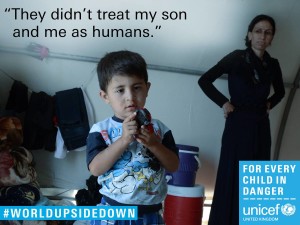 The dark stories shown in the film reflect the experiences of real children. In Syria, one in five children are forced to cross conflict lines to take exams. In Yemen, 573 children have been killed since the fighting escalated in March this year, more than four times the total in 2014.

Unicef UK Deputy Executive Director Lily Caprani, said: “Children have been killed while studying in the classroom, recovering in hospital or sleeping in their beds. Many have been orphaned, forced to become soldiers, kidnapped, raped and traumatised. Protecting children from violence is life-saving, just as much as water, shelter and medicine, yet it isn’t prioritised in the same way. This has to change.”

Unicef UK is calling on the UK Government to prioritise protecting children from violence, seizing the opportunity of the first World Humanitarian Summit next year. The briefing recommends that the UK should commit to:

This includes the UK taking urgent action to provide safe legal routes for children fleeing conflict and persecution, so that children are not forced to risk their lives on dangerous crossings or into the hands of traffickers and smugglers.

In emergencies last year, Unicef protected children from violence by providing over 3 million children with psychosocial support; placing 33,000 unaccompanied and separated children in alternative care; and reuniting 12,000 children with their families or caregivers. Unicef also secured the release of 10,000 children by armed forces or groups, and helped to reintegrate 8,000 children back into their communities.
The public can support Unicef UK’s call for the Prime Minister to protect children from violence in emergencies here.

Unicef UK briefing will be available here from 3 November 2015.