By newsroom on October 26, 2015Comments Off on ‘Spectre’ promo hits Snapchat for 24 Hours at midnight on October 25 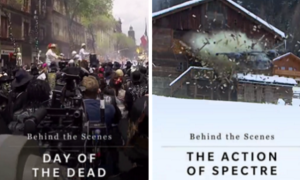 “This is a fun way for current and future James Bond fans to experience Spectre,” said Dwight Caines, President, Theatrical Marketing for Sony Pictures Entertainment. “For one day only, Snapchat will be the one-stop shop for Spectre content, including photos and behind-the-scenes looks at the making of this incredible movie.”

Nick Bell, head of content at Snapchat, said, “We’re huge James Bond fans and excited to give our community a sneak peek into the action.”

The promotion’s Spectre content was created specifically for the Snapchat platform, a marketing tool targeting millennials. The Spectre channel will be available in 17 countries, including the U.S., the U.K. and Australia.

Spectre, from Albert R. Broccoli’s EON Productions, Metro-Goldwyn-Mayer Studios, and SPE, opens Monday in the UK and November 6 in the US. In those markets on the opening days, Snapchat will offer Spectre geofilters, artistic overlays allowing users to incorporate Spectre art into phone and video snaps. Snapchat Live and Discover are also running full-screen vertical Spectre ads in various territories.