By newsroom on February 27, 2018Comments Off on TMW Unlimited steals hearts with moving film for Dogs Trust

TMW Unlimited has put real life families and their pooches at the heart of a new campaign for Dogs Trust, which aims to raise awareness of the problem of dog theft.

The film highlights the shocking fact that there are 2,000 incidents of dog thefts from homes each year and urges viewers “Let’s keep the family pawtrait complete.”

Various dog owners are shown having “family pawtraits” taken, with their four-legged family member taking pride of place. When asked what their pets mean to them and to contemplate what it would be like if their dogs were stolen, the response is that it would be akin to an abduction of one of their family members. 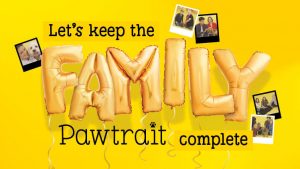 It is part of a wider campaign that Dogs Trust is running to encourage dog owners to keep your dog ‘safe, spottable and searchable’. At the same time, the charity is urging the Sentencing Council to hand down sterner sentences for people found guilty of dog theft.

Lee Paris, Campaigns Officer at Dogs Trust, said: “We love the insight behind this campaign, which is that dogs are part of the family. It sends a powerful, emotional message that we hope will change opinions on dog theft as a crime.”

Jackie Bee, Group Account Director at TWM Unlimited, said: “We’re proud to support Dogs Trust in raising awareness of dog theft and in campaigning for better sentencing of the perpetrators of this cruel crime, and we hope it helps change behaviours across the board.”

The video will run on social channels starting late February, backed with print and digital assets for use in Dogs Trust‘s owned channels. A photo album highlighting the gap that dog theft leaves in families is being sent to the Sentencing Council.

TMW Unlimited steals hearts with moving film for Dogs Trust added by newsroom on February 27, 2018
View all posts by newsroom →